MI5 used members of their ‘Double-Cross’ program — which turned German agents to the Allied Side — to convince the Nazis that their V-2 missiles were overshooting.

Using a cutting-edge statistical technique, however, researchers have shown that the rockets were so inaccurate that the spies’ efforts were futile.

V-2s typically only struck within 18 miles of their intended target — a fallibility that dwarfed the Nazi’s re-calibrations based on Allied disinformation.

Steve Le Comber of Queen Mary, University of London, and colleagues used a technique known as geographic profiling to locate the centre of the V-2 rocket strikes from January 20–February 17, 1945.

Geographic profiling was developed to track serial criminals based on the locations of their crimes — but Dr Le Comber, an evolutionary biologist, has since adapted the approach for other purposes, like tracing back disease outbreaks to their source.

From this, they were able to evaluate the success MI5’s scheme to trick the Nazis into aiming their V-2 rockets off-target and into less populated or critical areas.

‘It was one of the most elegant and simple plans ever devised by the security services,’ Dr Le Comber told The Telegraph.

‘The V-2 rockets were far too fast to be shot down, so MI5 needed a new way of stopping them hitting important and built up areas.’

‘The idea was to make the Germans [think they] were overshooting, but when we ran the model the cluster barely moves at all over the four week period.’

Records indicate that 1,358 of the supersonic rockets struck London between the September of 1944 and March 1945, resulting in an estimated 2,754 death and around 6,523 injuries.

Reaching a typical maximum altitude of 54 miles (88 kilometres) and speeds of up to 3,580 miles per hour (5,760 kilometres per hour), the V-2s were practically invulnerable to attack by British fighters or ground-based anti-aircraft fire. 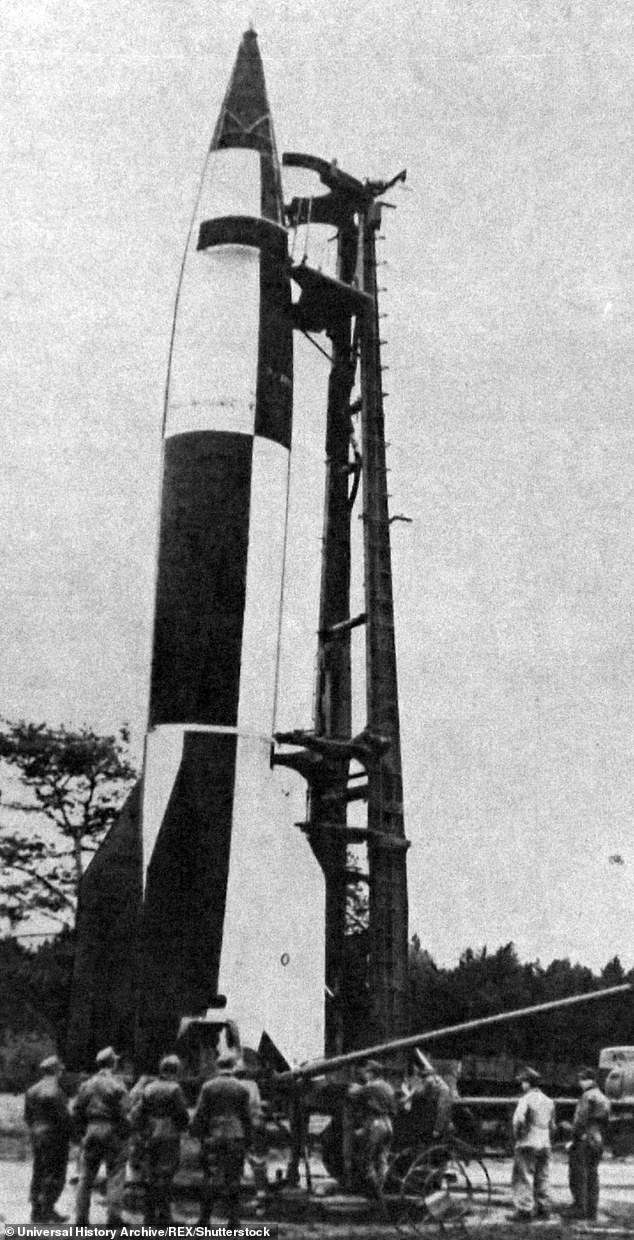 MI5 used members of their ‘Double-Cross’ program — which turned German agents to the Allied Side — to convince the Nazis that their V-2 missiles, pictured, were overshooting 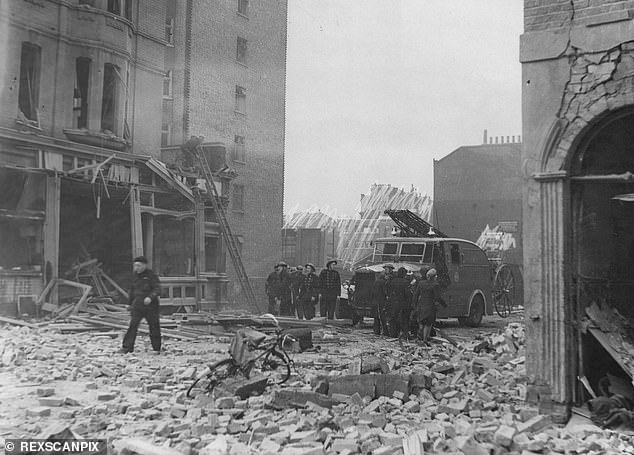 Records indicate that 1,358 of the supersonic rockets struck London between the September of 1944 and March 1945, resulting in an estimated 2,754 death and around 6,523 injuries

Instead, to protect built-up areas and vital strategic targets, MI5 made use of its counter-espionage Double-Cross — or ‘XX’ — operation, which fed misinformation to Nazi Germany via double-agents who had defected to the Allied side.

Overseen by the so-called Twenty Committee — a play on the roman numerals XX — two double-agents known by the codenames ‘Tate’ and ‘Rover’ were tasked with convincing their Nazi handlers that the V-2 rockets were missing their targets.

‘Over a period of some months we contrived to encourage the enemy steadily to diminish his range,’ Twenty Committee chairman Sir John Cecil Masterman wrote in an MI5 report in 1945.

‘Thus in the four weeks from 20 January to 17 February 1945 the real mean point of impact moved eastward about two miles a week and ended well outside the boundary of London region.’

This would have saved both Westminster and London’s docks — not to mention around 1,300 lived — had it been true.

WHAT DO WE KNOW ABOUT MI5 AGENTS ‘TATE’ AND ‘ROVER’?

‘Tate’ and ‘Rover’ were the codenames of two double agents turned by MI5 as part of the Double-Cross counter-espionage operation.

They relayed disinformation to Nazi Germany about the locations of V-2 strikes against London in early 1945.

‘Tate’, whose real name was Wulf Schmidt but later became one ‘Harry Williamson’, was a Danish citizen.

His German codename was Leonhardt.

Mr Schmidt was captured immediately after parachuting into England in the September of 1940.

His arrival plans had been divulged by a fellow spy and friend in exchange for sparing the Dane from execution.

As ‘Tate’, Schmidt became one of the longest-running agents in the Double Cross system.

‘Rover’, meanwhile, was a Polish sailor who had agreed to work as a Nazi spy in exchange for release from imprisonment in a labour camp.

Arriving in Gibraltar, however, ‘Rover’ turned himself over to the Allied authorities and was sent to work as a double-agent in England.

Similar confidence in the operation’s success was presented in a monthly report sent to Prime Minister Winston Churchill in the January of 1945.

‘Tate and Rover have continued to supply misleading information about the fall of V-2,’ the Twenty Committee wrote.

‘It is now possible to conclude with some certainty that the shift to the north-east of London of the mean point of impact of V-2 is due to reports from Special Agents.’

Dr Le Comber and his colleagues, however, found that the Twenty Committee’s findings had been skewed by their use of a ‘spatial mean’ — meaning they had also included outlier hits in areas like Norwich, Southend-on-Sea and Canvey Island.

This threw off MI5’s calculated centre point of the V-2 strikes. 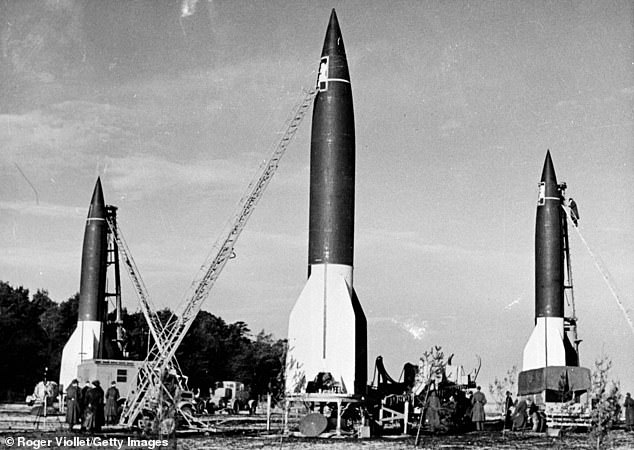 Reaching a typical maximum altitude of 54 miles (88 kilometres) and speeds of up to 3,580 miles per hour (5,760 kilometres per hour), the V-2s were practically invulnerable to attack by British fighters or ground-based anti-aircraft fire

In contrast, the researchers showed instead that — when aimed at a given target — the V-2 rockets tended only to be accurate to within an 18.6 mile (30 kilometre) radius.

As a result, the gradual changes in the targeting of the V-2s brought about by Tate and Rover would have been swamped by the rockets’ larger inaccuracies.

‘Our study finds no support for the idea that the Double Cross’s deception had any practical effect on the locations of V-2 strikes in London,’ the researchers concluded.

‘Across the whole bombardment, the brunt of the strikes was borne by the area around Ilford.’

‘Sadly, the ugly fact of a more sophisticated analysis appears to kill it.’

The full findings of the study were published in the Journal of Spatial Science.

HOW DID THE V-2 ROCKET WORK?

The automatic guidance system was perhaps the most important: this meant that once the rocket was in the air, with its destination programmed into the analogue computer, its gyroscopes could track its positioning, using the rudders to shift its course if needed.

Even today, rocket launchers still have similar engines and use gyroscopic guidance, and most are still rocket-fuelled.

The technology that went into the V2 was so sophisticated, that once the war was over, American and Soviet engineers picked the left over rockets to bits to understand how they worked.

With the help of Von Braun, who surrendered to the Allies and later became a hero of the space age, the technology was harnessed to develop rockets that would go into space.