Value for money is the order of the day as cost-conscious families tip-toe gently back into the new car market following the re-opening of showrooms.

Just as some canny shoppers might swap Waitrose and M&S for the delights of Aldi and Lidl, motorists on a budget are finding that you don’t have to break the bank to get a decent set of new wheels.

So how about something built in North Africa from a Romanian car-maker owned by France’s Renault?

Value for money: Just as some canny shoppers might swap Waitrose and M&S for the delights of Aldi and Lidl, motorists on a budget are finding that you don’t have to break the bank

The new Dacia Sandero — which I’ve just been driving along with its sportier Sandero Stepway sibling — is officially the cheapest new car in the UK market, with prices from just £7,995.

That’s half the price of a Ford Fiesta and makes it competitive even with the price of many second-hand cars. But there’s a big difference between cheap and good value, which is why the Sandero was recently crowned What Car? of the Year 2021 by the consumer magazine, as well as picking up the title for best small car, adding to a long list of accolades. Its sibling Dacia Duster was named best family value SUV.

But, in a surprise blow to both Dacia and What Car?, official crash-test safety figures issued on Wednesday rated both the Dacia Sandero SUV and Sandero Stepway with just two stars out of a potential five.

The head of Euro NCAP said the car’s limited autonomous emergency braking system was ‘disappointing’ as it uses cameras which only scan for other vehicles rather than pedestrians and cyclists.

However, the organisation also said: ‘Crash protection is respectable, with performance that would make the car a fourstar performer if it were not for its shortcomings elsewhere.’

Founded in 1966, Dacia’s rise began from 1999 when French car giant Renault took over the Romanian car-maker, introducing the first car into Western Europe — the Logan — in 2004, followed by the first Sandero in 2008.

The Dacia Duster SUV — built in Mioveni, Romania — has also gained a cult following with people who like to customise their vehicles. Even Pope Francis is impressed, having been presented with a customised Dacia as one of his official ‘Popemobiles’.

But heading back to basics doesn’t mean ignoring fun. The new model Sandero is no-fuss driving like it used to be — simple. And the underpinnings — from the chassis to the engine and electrics — are from the new award-winning Renault Clio. There’s a steering wheel, a gear-stick and an easy to navigate dashboard. The interior trim, while not luxurious, is nicely done, with soft-touch trim and fabrics. It also has a bigger boot, more legroom and plenty of storage cubby holes.

For £7,995, the entry level Sandero in Access trim offers the basics. There’s no touch-screen sat-nav or radio, but there is a cradle to slot in your smartphone which can provide this.

The extra kit builds steadily through the trim levels, with Essential starting from £8,995 and Comfort from £11,595 which does have a sat-nav.

The more SUV-like Sandero Stepway — accounting for around 60 per cent of UK sales — rides with 174mm higher ground clearance and has versatile modular roof bars that can be turned into a roof rack capable of carrying up to a respectable 80kg of kit.

To help save on emissions and improve fuel efficiency, there’s also a TCe 100 ‘bi-fuel’ petrol and liquid petroleum gas (LPG) turbocharged 1.0-litre three-cylinder engine, with six-speed manual gearbox, which flicks automatically between the gas tank and the petrol tank as required. 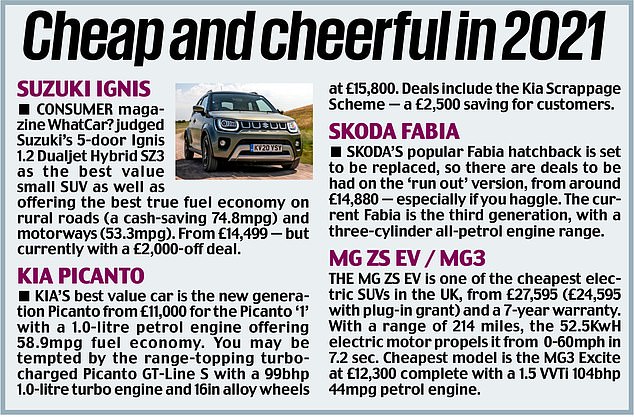 It may be a relaxed drive, with acceleration from rest to 62mph in a stately 12 sec up to a top speed of 107mph, but it still feels sufficiently energetic and will average a frugal 50.4mpg with CO2 emissions of 127g/km. Price as driven was £14,604 including the metallic paint (£560).

Car-price trade experts at CAP-HPI said the Sandero and Sandero Stepway enjoy ‘best in class’ residual values and predict they will retain 53 per cent of their value after three years and 30,000 miles.

What Car? editor Steven Huntingford said of the winning Car of the Year Dacia Sandero: ‘In the wake of an incredibly tough year and with the prospect of hard times ahead economically, the Sandero is the perfect new car for the moment. It will put a smile on the face of any buyer and is priced at a level where it can appeal to anyone.’

The publication was, however, disappointed with the Sandero’s crash-test safety rating of two stars when it had been expected to gain three.

All new Dacias are covered by a three-year 60,000-mile warranty, which can be increased with a ‘Peace of Mind’ extended warranty offering up to six years and 100,000 miles of cover.

Customers can also sign up for three- and four-year service plans costing from £9.99 a month.

David Beckham has just signed up as a ‘global ambassador’ for Italian luxury sports and grand touring car firm Maserati.

For the launch, the former England football captain stars in a short promotional video having fun and — safely — appearing to do rubber-burning ‘doughnut’ circles in a range-topping £125,000 Maserati Levante Trofeo SUV. 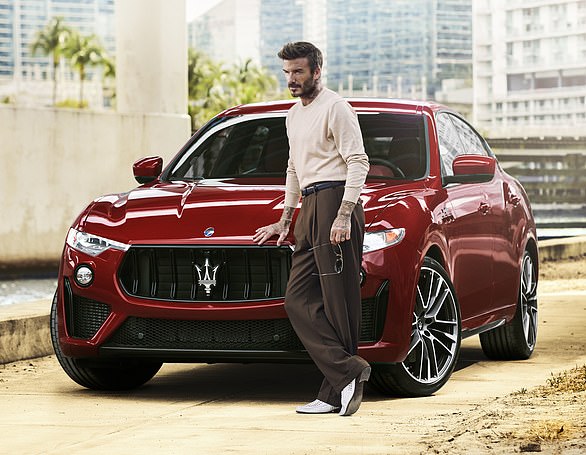 Best foot forward: David Beckham says it is an exciting time for him to begin a partnership with Maserati

Maserati says: ‘The movie sees the Maserati Ambassador driving the brand’s ultimate performance SUV — the Levante Trofeo. It shows Beckham performing an audacious act of driving in a Maserati, just for the sheer joy of doing the unexpected.’

Beckham says: ‘It’s an exciting time for me to begin this partnership with Maserati; an iconic Italian brand which shares my appreciation for the very best innovation and design.’

Maserati seem pleased, too: ‘David Beckham is the perfect partner to accompany Maserati on the next leg of its journey.’ Energy firms hit those who refuse to have smart meters with...