The number of people taking out mortgages jumped to a five-month high in June, new figures show.

Some 66,400 mortgage approvals were made to home buyers in June – the highest total since January, according to Bank of England data.

This suggests the housing market may be returning to stable ground after Brexit uncertainty.

The number of house hunters registered per estate agent branch fell slightly in June, from 307 to 305, with the number of prospective buyers remaining high for the time of year, according to separate figures from estate agent body NAEA Propertymark.

The number of people taking out mortgages jumped to a five-month high in June, data shows

In June 2018, the figures were very similar with an average of 308 house hunters per branch, reinforcing the suggestion the housing market is continuing to show resilience as demand from buyers remains high.

‘June’s mortgage data tie in with the view that housing market activity got some help from the avoidance of a disruptive Brexit at the end of March, but the overall benefit has been relatively limited.

‘Improved consumer purchasing power and robust employment growth has also recently been helpful for the housing market but latest developments have been somewhat mixed, with employment growth in particular showing signs of slowing.’

However, housing supply has faltered with the number of properties available per estate agency branch dropping from 41 in May to 37 in June.

This number is also down marginally annually, with 39 properties listed per branch in June 2018. 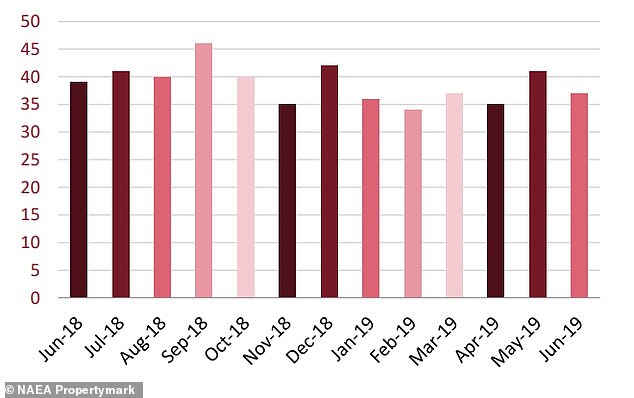 The number of sales made to first-time buyers in June also decreased, falling from 26 per cent in May, to 23 per cent in June.

This is a year-on-year decrease of six percent from June 2018 when it stood at 29 per cent.

In June, 86 per cent of properties also sold for less than the original asking price with just three per cent selling for more.

Mark Hayward, chief executive of NAEA Propertymark said: ‘Although we’ve seen a slight drop in supply and demand, the housing market is still stronger than expected, showing signs of resilience amid political uncertainty.

‘The warmer months can often result in the market quietening down, but we’re not yet experiencing this just yet as demand remains high for the year.

‘We’ll need to see if this trend continues over the next few months before we can conclusively say that confidence in the market has returned.’ 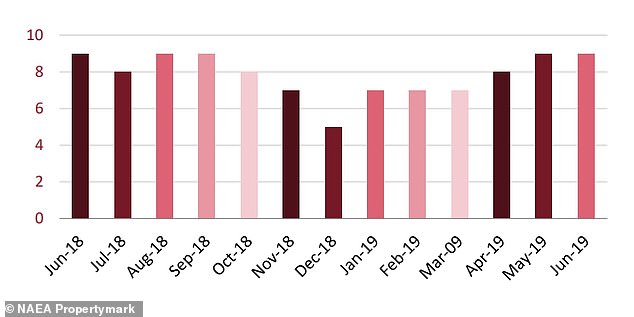 Meanwhile, annual growth in consumer credit, including credit cards, overdrafts and personal loans, slowed to its lowest level for more than five years, according to the Bank of England’s Money and Credit report.

Consumer credit increased by 5.5 per cent annually in June, down from 5.7 per cent in May – marking the weakest yearly growth since April 2014.

The Bank said annual growth in consumer credit has fallen steadily since it peaked in late 2016.

Archer believes that households ‘have seemingly become relatively careful in their borrowing amid concerns over the economic outlook’.

He said: ‘It is also evident that consumer credit growth has recently been limited by markedly weaker private car sales as this has reduced demand for car finance.

Five questions you must your estate agent to boost your chances...