The moon will appear 30 per cent brighter and 14 per cent larger than usual this morning as our lunar satellite reaches the closest point to Earth in its orbit around the planet.

Known as the ‘pink supermoon’, it will be full just before sunrise on Tuesday.

However, despite its name, the moon won’t appear pink. The name comes from the phlox flower that blooms in North America in the early springtime.

Instead, the moon will appear a goldish colour and will be about 30 per cent more dazzling and 14 per cent larger than the average full moon when it reaches its peak at 04:31 BST.

April’s full moon, known as the pink moon, looms somewhat ominously behind Arthur’s Seat in Edinburgh as a family enjoys a walk 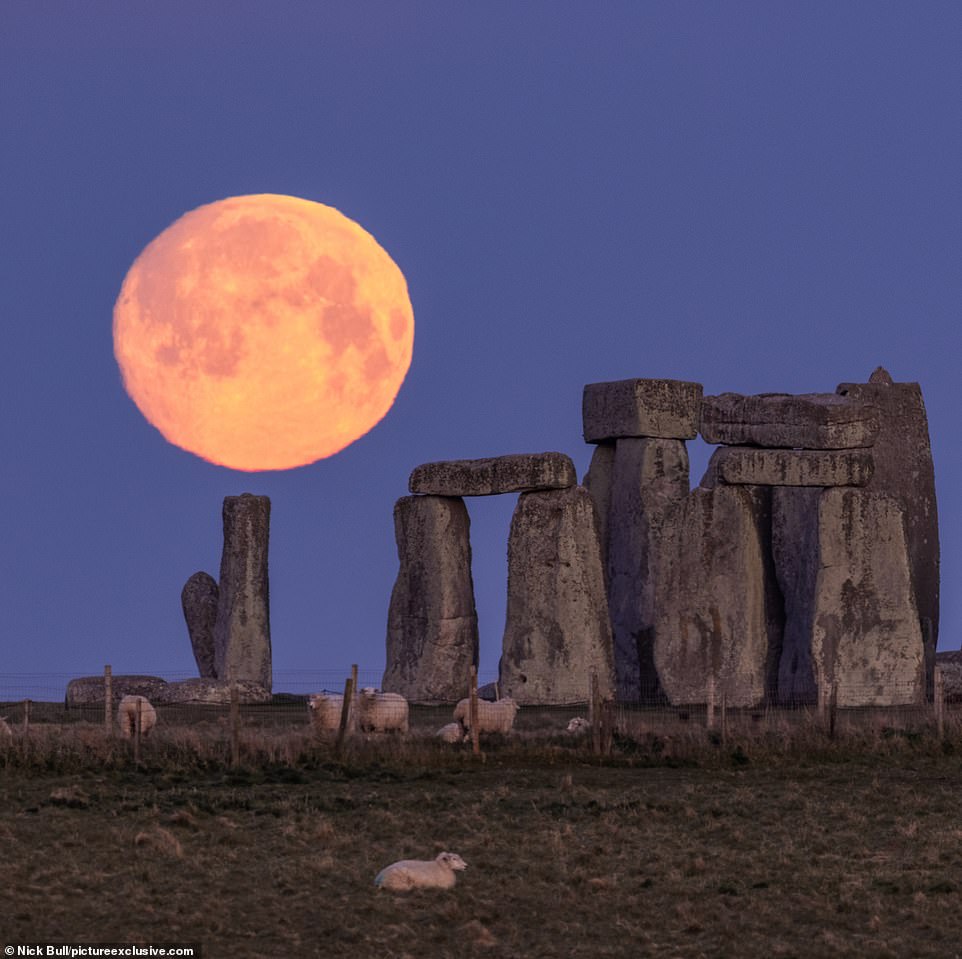 The beautiful pink moon is seen over Stonehenge in Wiltshire, although the grazing sheep look as though they don’t really care 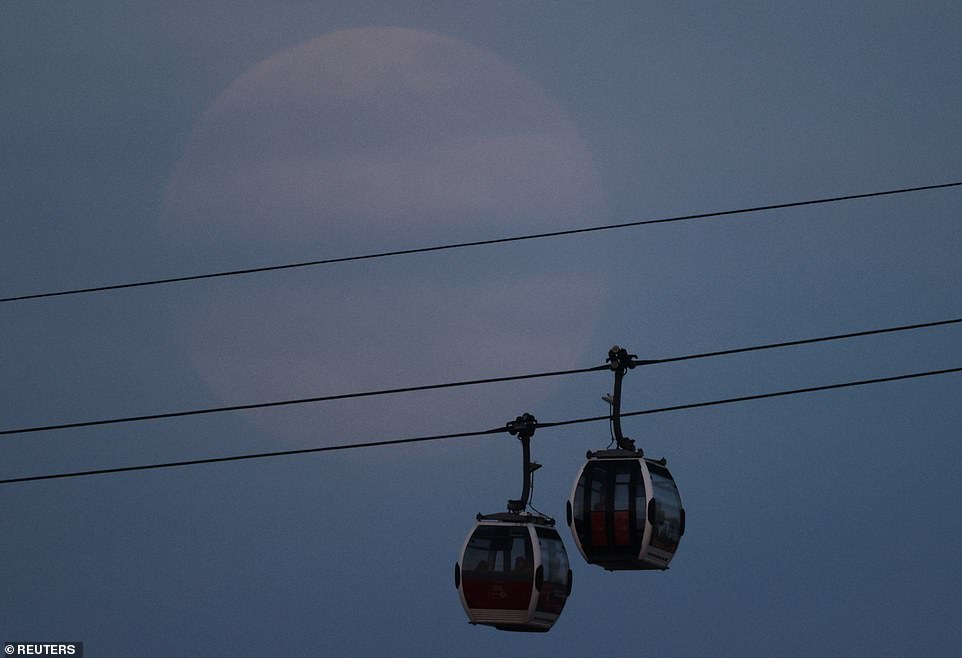 Passengers travel on the Emirates Air Line cable car as the full moon, also known as the Supermoon, rises over London 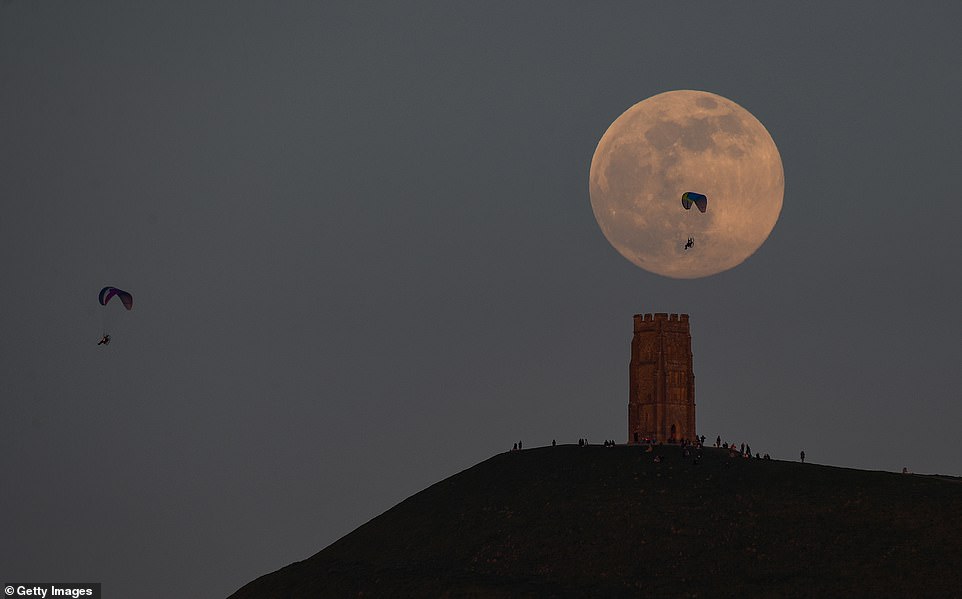 These paragliders look like they are re-enacting a scene from classic film ET: The Extra-Terrestrial as they fly over Glastonbury Tor tonight 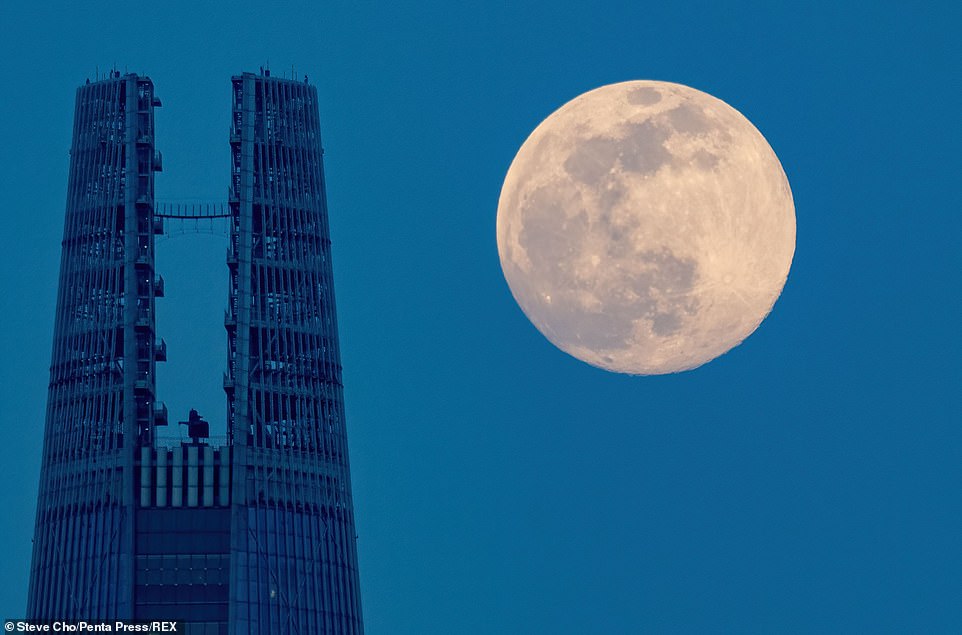 The moon is seen over the 123 storey Lotte World Tower in Seoul, South Korea, which at 1,823 ft is the world’s fifth tallest building 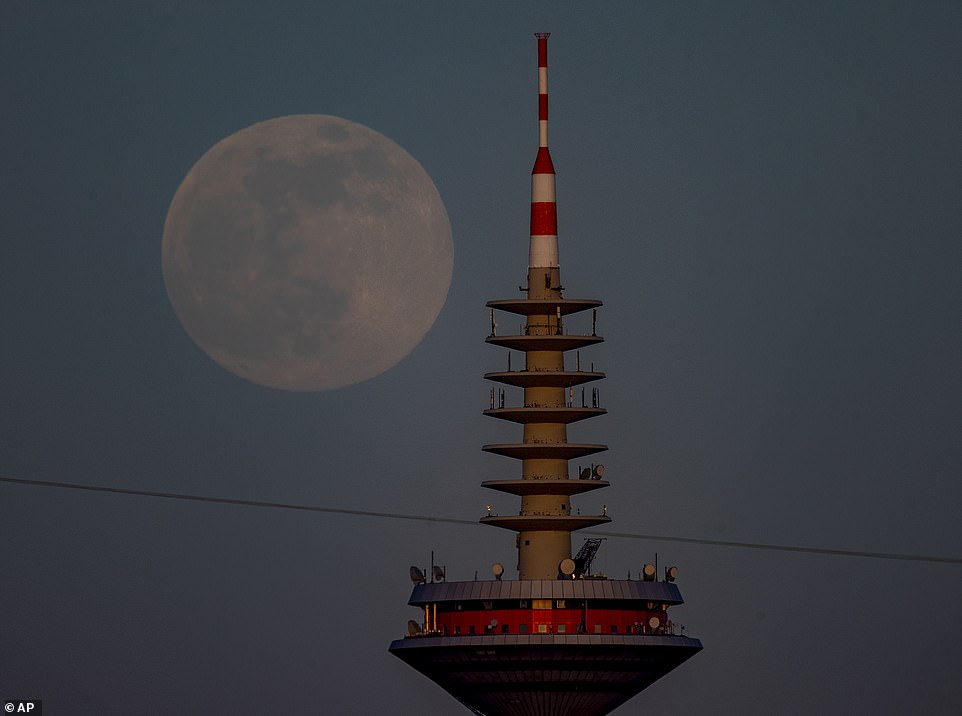 The full moon is seen in all of its glory as it rises spectacularly behind the television tower in Frankfurt, Germany 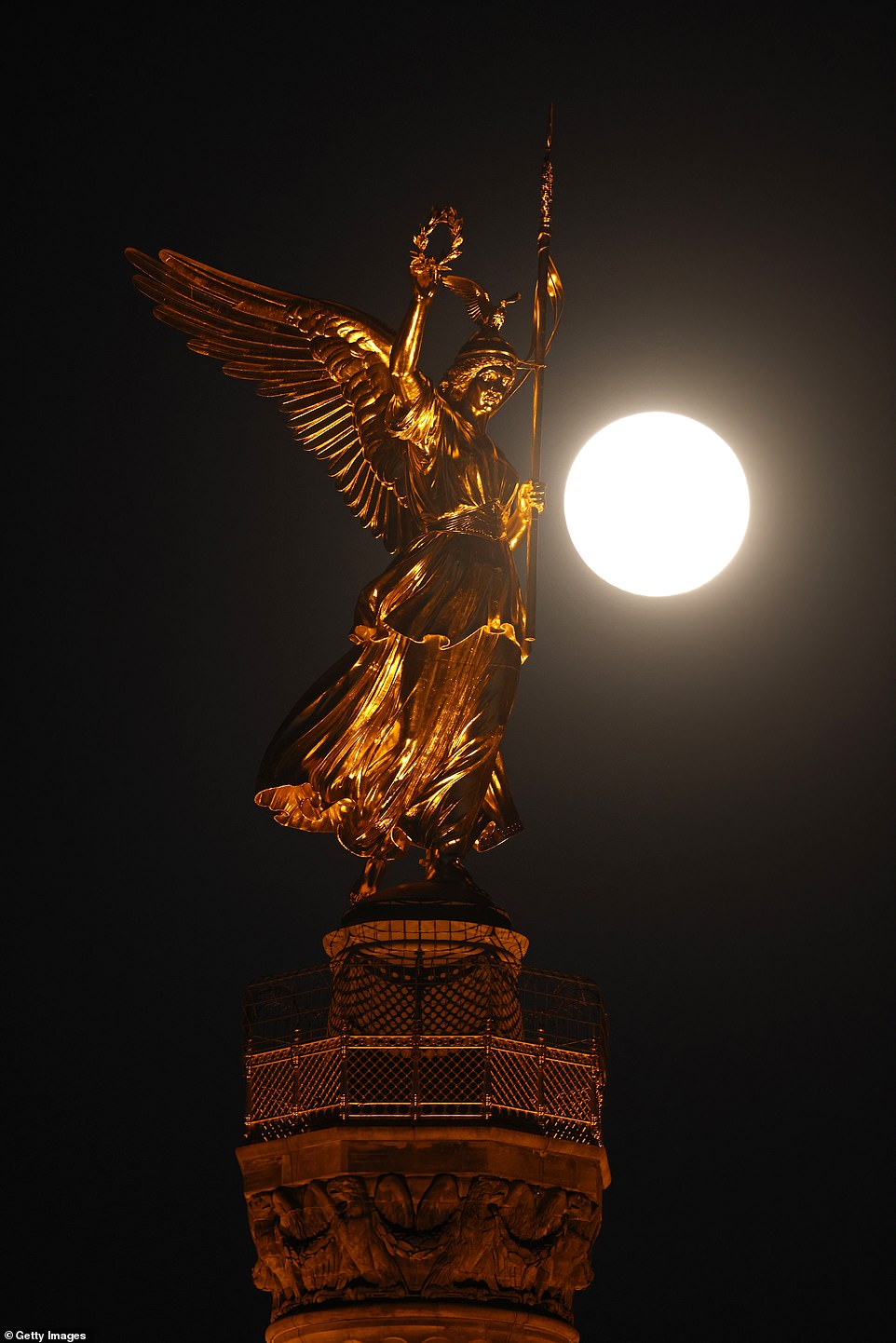 The supermoon shines as it rises next to the statue of Victoria on top of the Victory Column in Berlin, Germany 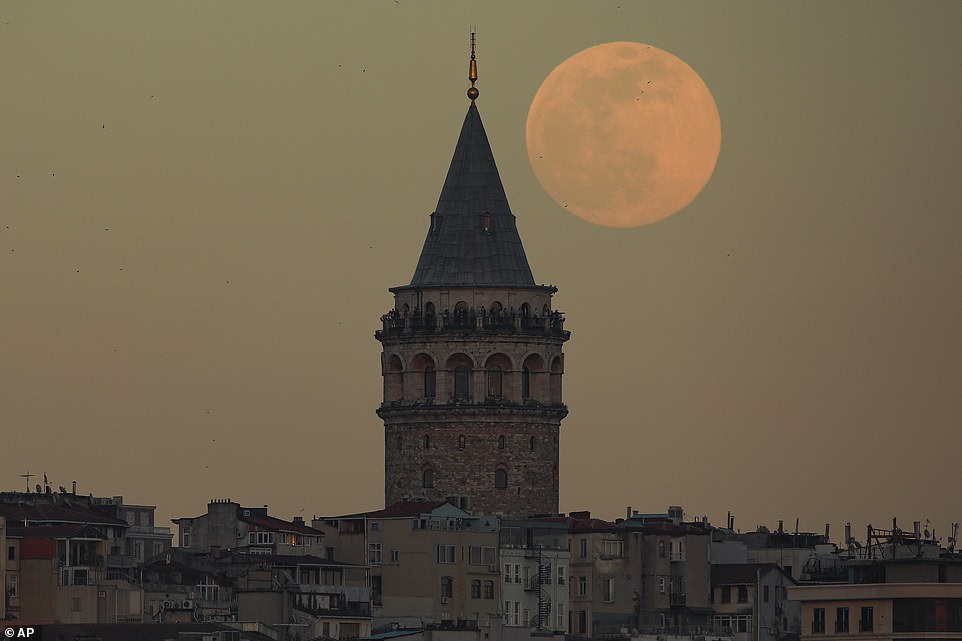 Istanbul’s medieval Galata Tower, which was built in 1348 and houses a nightclub on its upper floors, is seen next to the moon 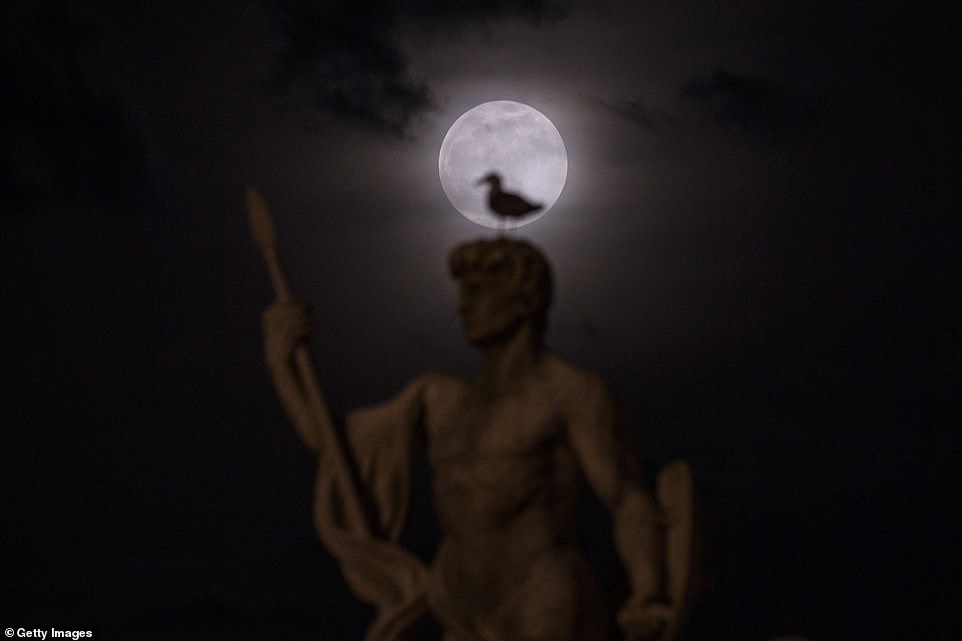 The picturesque super moon rises through the clouds behind a statue of the Vittoriano on April 26, 2021 in Rome, Italy 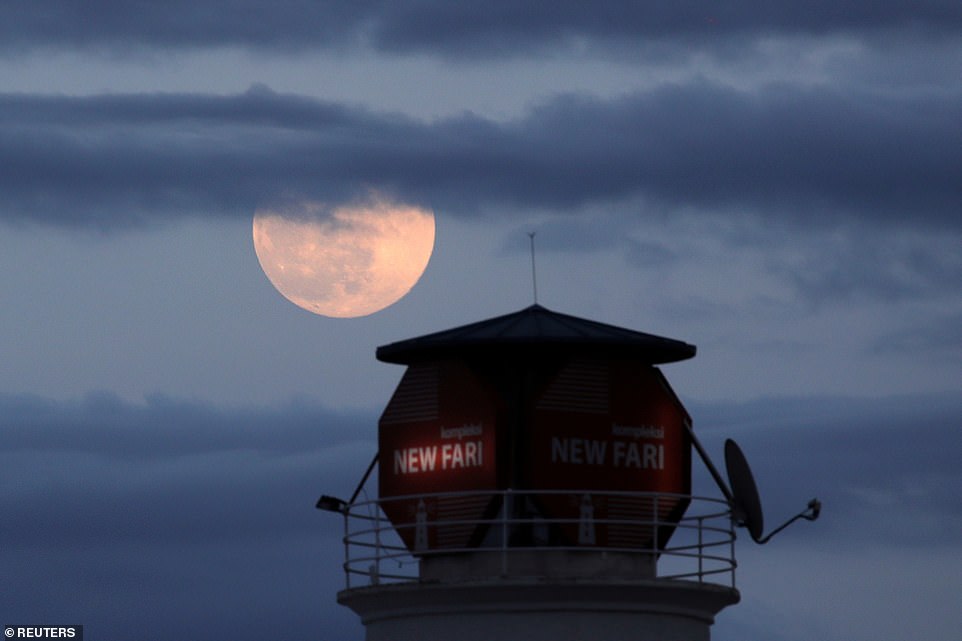 The supermoon shines brightest in this beautiful picture taken tonight in Tirana, Albania 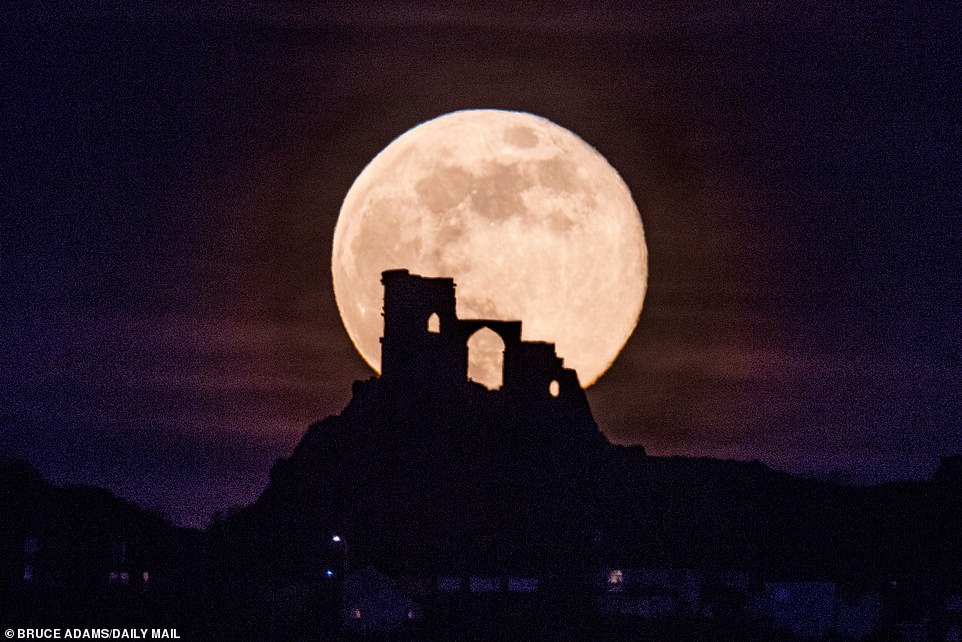 The moon will appear 30 per cent brighter and 14 per cent larger than usual tonight as our lunar satellite reaches the closest point to Earth in its orbit around the planet. 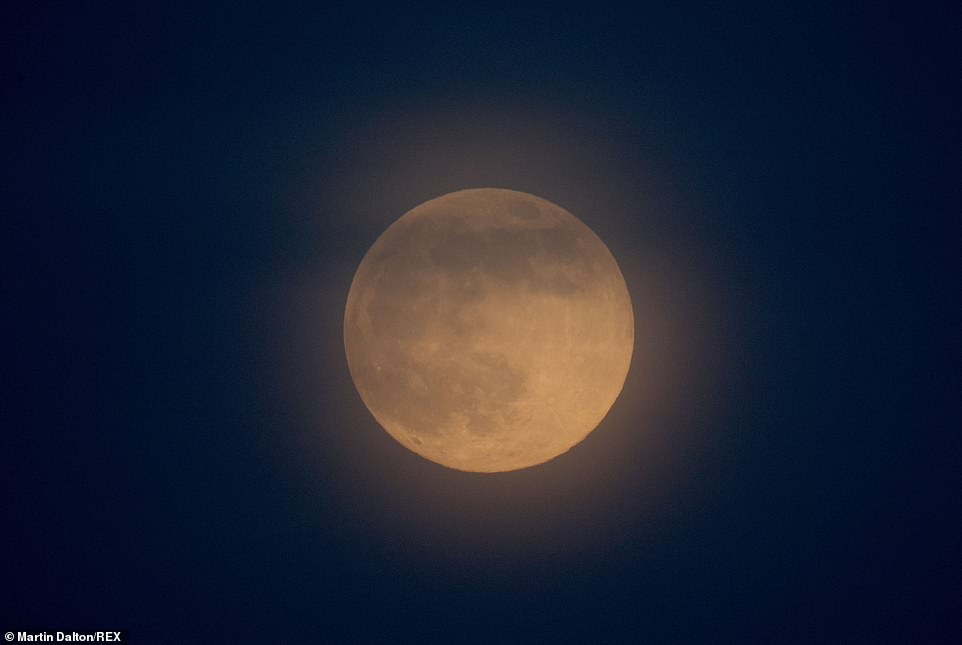 The supermoon is seen rising over farmland in rural Essex, England, as it passes 358,000km away from the planet Earth

WHEN TO SEE THE PINK SUPERMOON

The Pink Supermoon will rise at about 19:28 BST tonight, reaching its fullest point at about 04:32 BST.

The best time to view the supermoon is from sunset to sunrise between April 26 and April 27 2021.

However, it will be visibly full each night until sunrise on Wednesday, April 29 when it will enter the waning gibbous phase.

Anna Ross, an astronomer at the Royal Observatory in Greenwich, said the average distance between the Earth and the moon is 238,171 miles.

‘This means that the best times to view this supermoon will be anytime during the night of April 27.’

A supermoon typically only occurs once a year, when a full moon coincides with the moon also being at the closest orbital point to Earth, called a perigee.

Compared to standard full moons, supermoons can appear between seven and 14 percent larger and up to 30 percent brighter.

Supermoons are relatively rare because the moon’s orbital path around the Earth is elliptical instead of circular, meaning that full moons rarely occur when the moon is also at its perigee.

Rather, most full moons occur when the moon is further away from the Earth, making it seem dimmer and not quite as big as it does during a supermoon.

‘As this means that the moon is a little closer to us, it appears slightly bigger in the sky,’ explained Ms Ross. 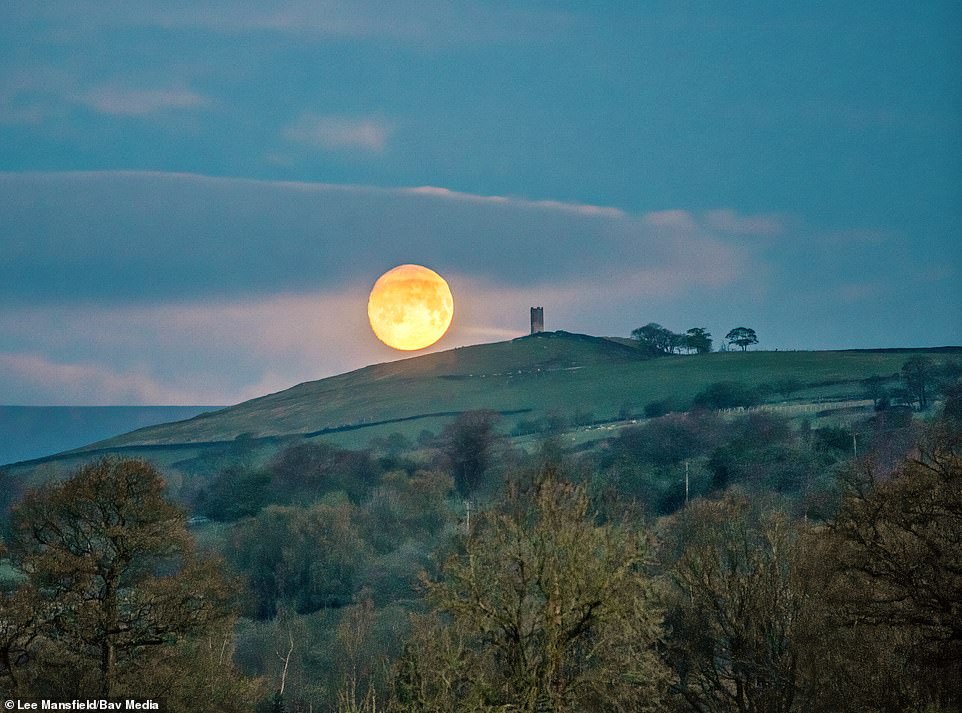 The beautiful pink moon, so named as it was used in the farmers’ almanac, is seen by Blacko Tower in Blacko in Lancashire 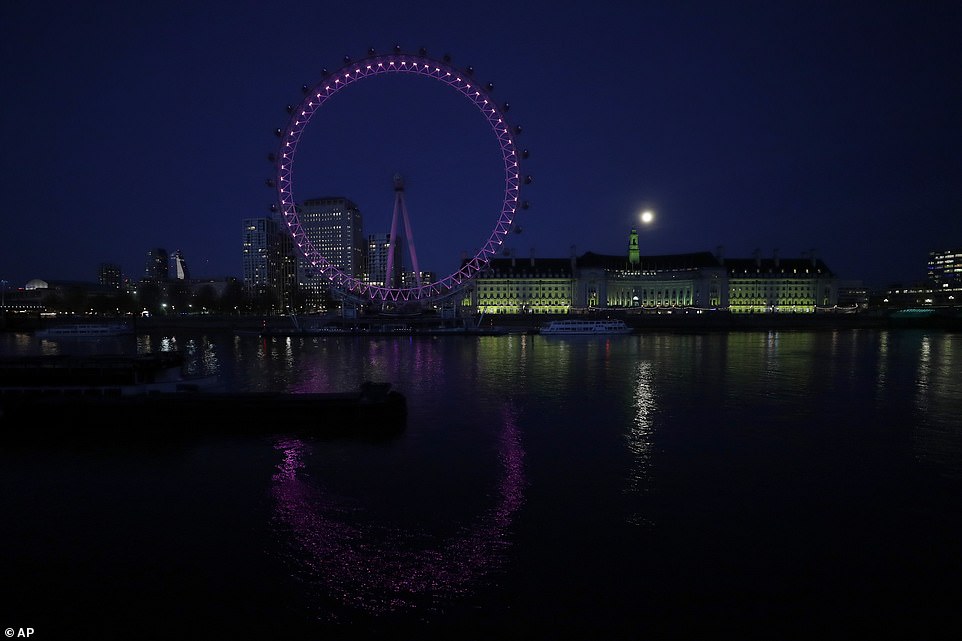 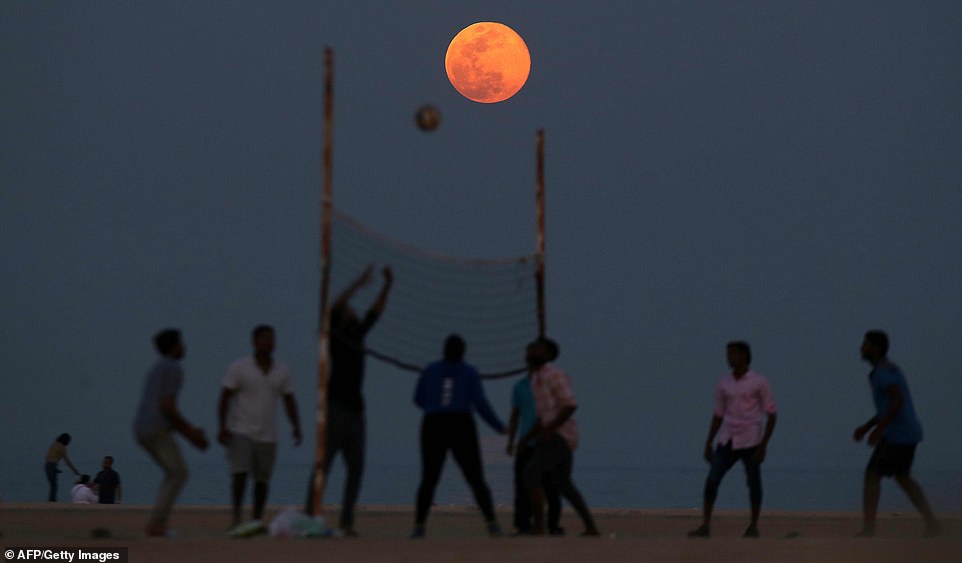 If you miss the Pink Moon, the Flower Moon will rise May 26 and be 98 miles closer to Earth, the second of the two supermoons in 2021.

Supermoon and full moon names come from key events at the time of year they occur, named for flowers that bloom or animals that appear.

The ‘pink’ label was chosen in part as a reference to a type of wildflower native to North America called ‘phlox subulata,’ which has a vivid pink hue and is a common sign of spring.

TIPS FOR VIEWING A SUPERMOON

Get up high! The further up you are, the better your chance of a clear sky to see the stars, plus you’ll be able to see low down to the horizon to watch the moon rise!

Turn off the lights For those stargazing from the comfort of their homes, turning off the lights indoors can improve the visibility of the night sky.

Choose a night with clear skies suggests choosing a night when clear skies are expected for the best chances of seeing the stars.

May’s Flower Moon gets its name from the fact flowers spring forth and become abundant during the month. Other names include the planting moon and the budding moon.

Scientist Noah Petro of NASA’s Goddard Space Flight Center in Maryland encouraged people to take advantage of the phenomenal lunar event even if they could only look out their living room window.

‘Go out next month or whenever it’s safe again. Use the full moon as an excuse to get out and start looking at the moon.

‘Use this as an opportunity to not physically distance yourself, but emotionally connect with something that is physically far from us.’

WHAT IS A FULL PINK MOON AND WHERE DOES IT GET ITS NAME?

The phenomenon, known as the ‘Pink Moon’, earns its name from the flowering of the brightly-coloured herb ‘moss pink,’ which typically coincides with its arrival.

The name comes from the Herb moss pink phlox, or ‘wild ground’ phlox, which blooms in early spring in the US and Canada.

In the Northern Hemisphere, the April full moon lines up with the blooming of one of spring’s earliest-flowering plants – wild ground phlox, or ‘moss pink’.

The phenomenon, known as the ‘Pink Moon’, earns its name from the flowering of the brightly-coloured herb ‘moss pink’

The pink moon, which is also known as the grass moon and the egg moon, was given its moniker by Native Americans, who provided a name for each full moon to help them keep track of time.

Native Americans have a name for the full moon of every month in the calendar, including Wolf Moon for January, Snow Moon for February and Worm Moon for March – then Flower Moon in May. Strawberry Moon is for June, Buck Moon is for July and Sturgeon Moon is for August.

In September, there is a Harvest Moon, Hunter’s Moon is in October, Beaver Moon is in November and Cold Moon is in December.