House prices surge to all-time high as Halifax confirms post-lockdown property rally – but how long can the mini-boom last?

By Will Kirkman For Thisismoney.co.uk

House prices recovered to hit their highest levels on record in July as months of pent-up buyer demand was released and the stamp duty holiday put a shotr in the srm of the property market.

Prices saw an uptick for the first time since the lockdown began, according to the latest Halifax house price index, growing on average 1.6 per cent after months of decline and stagnation.

This brings the price of the average UK home to £241,604, some 3.8 per cent higher than last year despite the decline in the first half of 2020. But experts warn the recovery may be short lived as the furlough scheme nears its end and fears of the health of the economy loom.

Some 63,250 homes were bought and sold in June, a rise of 31.7 per cent from May following the Government’s lifting of lockdown measures and the introduction of the stamp duty cut.

This echoes the Royal Institution of Chartered Surveyors’ recent findings that buyer demand, sales and new listings have all rallied after declining dramatically during lockdown.

Halifax’s Russell Galley said: ‘The average house price in July is the highest it has ever been since the Halifax house price index began.

‘The latest data adds to the emerging view that the market is experiencing a surprising spike post lockdown. As pent-up demand from the period of lockdown is released into a largely open housing market, a low supply of available homes is helping to exert upwards pressure on house prices.

What has fuelled the housing market recovery?

On top of the Government lifting the restrictions on moving house it  delivered a boost to home buyers with a stamp duty holiday that means buyers pay no tax on the first £500,000 of any property purchase.

This will save those buying the most expensive homes costing £500,000 or more a maximum of £15,000 and lift all those paying less than that out of the property moving tax net altogether.

Estate agents in London and the South where house prices are higher and stamp duty bills more punitive report that the cut has spurred many potential buyers into action.

‘However, looking further ahead, there is still a great deal of uncertainty around the lasting impact of the pandemic.’

Halifax’s findings echo a recent update from Nationwide which found that the value of the average UK home jumped by £4,533 in July.

How long will the housing mini-boom last?

What remains uncertain is how long this uptick will last as the state of the economy remains in flux.

With the furlough scheme coming to an end many experts have a gloomy outlook on the economy, which could potentially end the current recovery in the housing market.

Russell Galley added: ‘Looking further ahead, there is still a great deal of uncertainty around the lasting impact of the pandemic.

‘As government support measures come to an end, the resulting impact on the macroeconomic environment, and in turn the housing market, will start to become more apparent.’

On top of the furlough scheme ending, Britain’s most vulnerable firms are facing a £50billion cash-flow crisis which will fuel a surge in insolvencies and a fresh wave of job losses, according to the Bank of England.

Guy Harrington, chief executive of lender Glenhawk said: ‘It might be all smiles now, but yesterday’s Bank of England forecast made for depressing reading and the imminent unemployment car crash when furlough ends will bring the market rapidly down to earth.

‘The government should be applauded for its stimulus efforts, but sadly it’s going to get a whole lot worse before it gets better.’ 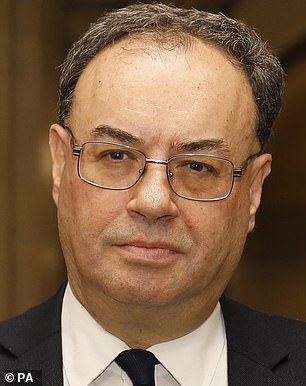 The Bank of England hinted that negative interest rates could also be on the table in future after governor Andrew Bailey confirmed the controversial policy is in its ‘toolbox’.

The policy – which has been used by the European Central Bank and in Japan – involves charging banks to deposit money at the Bank of England in order to encourage them to lend this cash to firms and households instead.

This could drive down mortgage rates to historically low levels, granting access to finance to more households and potentially boosting the market.

However Bailey noted the Bank ‘has no plans to use them at the moment’.

Andrew Montlake of mortgage broker Coreco, said: ‘The mini-boom is real, but so are fears of a maxi-bust. Prices and activity are holding up well for now as the post-lockdown surge continues, but everyone knows that the Autumn is when we will see the real impact of coronavirus on the economy.

‘The Government has a phenomenal task ahead to keep people in jobs, which will clearly determine the direction of house prices in the short to medium-term.’ ‘It is a poor business masquerading as a great one’: Burford...