Daniel Dubois is talking about the warrior’s code and how one night last November at Church House in Westminster, he was accused of betraying it.

Dubois was accused of a lot of things that evening. Dillian Whyte called him a coward. Carl Frampton said, if it had been him, he would have had to be dragged out of the ring. David Haye said he would rather have been knocked out.

Dubois, who had won all of his 15 professional fights up until that point, 14 of them by knockout and had built a fearsome reputation as the hottest young prospect on the booming heavyweight scene, was fighting a more experienced opponent, Joe Joyce, that night but was still a clear favourite. Few expected an interruption to his upward trajectory. 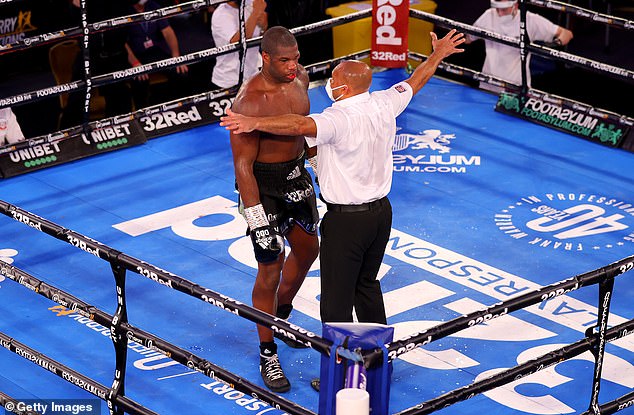 But Joyce fought a clever, skilful fight and broke the orbital bone around Dubois’s left eye in the third round. The rest of the fight was not easy to watch.

Dubois could not see out of his left eye, which became grotesquely swollen, but he fought on for seven more rounds. That seemed like raw courage in the face of overwhelming adversity. No one threw in the towel.

Dubois, 23, fought until the 10th round when another stiff jab from Joyce landed flush on the broken bone and stunned him. He says he ‘felt the eye go’. He says he had not experienced that kind of pain before.

He says he was ‘discombobulated’. He had been subjected to a kind of slow torture for more than half the fight and now he could not take any more. He went down on one knee and was counted out.

And for that, he was called a coward, a quitter and plenty else besides. ‘I don’t understand,’ Dubois says as he sits outside at his home in Essex.

‘They all attacked me. All the big boys on TV, all the boxing guys. They knew what the situation was. They could have been a bit more empathetic. The boxing business teaches you a lot about different people and what they are thinking. They can’t wait to see you lose sometimes.

‘Was I hurt by it? It was strange. I wasn’t really hurt. I have a stone heart. I can’t be shaken. But it was a weird time. I guess them guys, they have a right to talk about it. I have seen it happen to fighters before. They slag you off and now it’s happening to me. I should have been expecting it.’

He talks again about the warrior’s code and how it seems to be applied to some and not to others. We speak briefly about Frampton.

Last Saturday, Frampton fought Jamel Herring in Dubai for the world super-featherweight title. Frampton is a brilliant fighter who has always been the epitome of courage and spirit.

Last Saturday, it had soon become clear he was losing the fight and taking heavy punishment from Herring. He was knocked down in the fifth round and again in the sixth. But he did not have to be dragged out of the ring, as he had said he would be. Before he could be hurt any more, his trainer, Jamie Moore, threw in the towel.

So how does that tally with the warrior’s code? Frampton, quite rightly, was excused criticism because someone else quit for him. Frampton was excused criticism because the consensus was that Moore had done the wise and compassionate thing by refusing to allow him to take more punishment. Herring even talked about Frampton’s family and how important he had been rescued from harm’s way. ‘No one called Frampton a coward,’ Dubois says.

And yet back in November, few stood up for Dubois. No one talked about his family. Few mentioned the fact that, if Dubois had fought on, he might have suffered permanent damage to his left eye.

Medics discovered later he had suffered two fractures in different bones. They diagnosed retinal bleeding, too. He could have lost the eye altogether. His career could have been over. 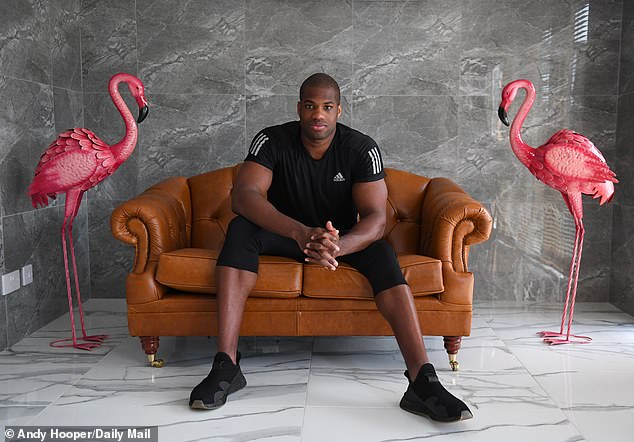 Dubois, whose sister, Caroline, is a contender for boxing gold for Team GB at the Tokyo Olympics this summer, is not a rat-a-tat speaker who spills out his words in articulate bursts like so many boxers.

He talks softly and thoughtfully, in a way that belies his ferocity in the ring. Perhaps it is his gentleness that has encouraged so many to question whether he has what it takes to come back from the kind of setback he suffered against Joyce and the insults that followed it but Dubois is in no doubt. ‘That will just build the fire again,’ he says, ‘and make me want it even more.’

Dubois’s eye has healed now and he has been given the all-clear to resume his career. It is expected that a date and an opponent for his comeback fight will be announced soon and that it will take place towards the end of next month. He is working with a new training team of Mark and Jimmy Tibbs and he says he is relishing his return to the ring.

‘I have to be ready to fight whoever they bring at me now,’ he says. ‘Guys that weren’t taking the fight before, they will have it now. They will try and copy Joe and I’m looking forward to that. Seeing what I have got up against me. They will think the aura is broken and they will think they’ll have me, that I’m vulnerable.

‘They can try to mess with me. They can insult me if they want and talk about what happened but I’m relishing that prospect and seeing these fighters that were hiding before and now they’ll take it.

‘One day, I’d like to get in the ring with Dillian Whyte and show him just how much of a quitter I am. All of it will give me the experience I need as a fighter. I’ll get better fights under my belt.’

‘It is hard to gauge quite how much psychological damage the defeat by Joyce has inflicted on Dubois and how he will react when he is involved in another close fight. He insists it has not affected his love for boxing or his dedication to the sport and that he craves the world title that was once predicted for him more than ever. 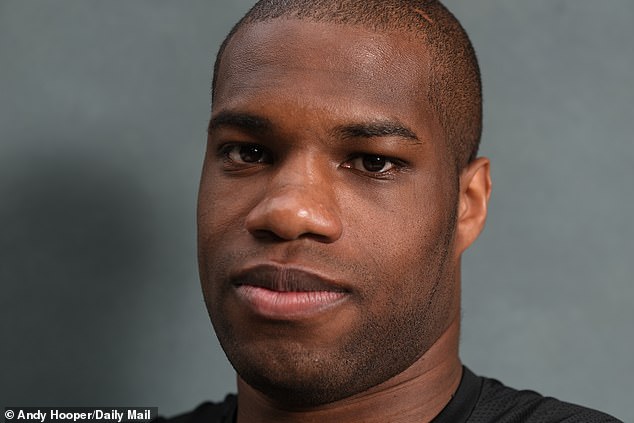 ‘He pauses when he thinks about whether he felt any shame about the way the fight against Joyce ended. ‘I was gutted,’ he says after a while. ‘I was devastated. My whole thing up until then was winning. Then it was like ‘what does this mean?’ I didn’t understand it. I don’t want to dwell on it. I want to lift myself up and carry on.

‘When they slag your name off in the public and in the media, it can paint a bad picture around you and ruin your reputation. But listen, I’m going to build that back up and clean the slate. I’m not going to fall back and let it destroy me. I’ve got to make it inspire me and bring me back up there and make a point and prove how good I am. I can’t wait.

‘I think about what people said about me and about what bravery means. Bravery is going out there and doing what you have to do. No matter how you feel about it. I prepared my body well. I am as strong as most heavyweights. The next part is the mind. It’s going out there and executing a plan and not wavering for a second, not being distracted.

‘Bravery is many things. It is having the will to win and going out and facing your fears. The fight made me question a few things about how good I really am, what went wrong, can I do this really? When I thought about fighting again, I didn’t falter.

‘But there are questions you have to ask yourself as a fighter if the hunger isn’t what it should be. It didn’t make me question my courage. I know I have the heart of a lion. I’m up there with the strongest guys out there. I will keep coming, no matter what. The goal is still to win the world title and hold on to it.’

Some worry that Dubois will never be quite the same again. They fear that the brutal manner of the defeat and the stinging reaction will have left a scar in his mind that will take far longer to heal than the bones around his eye.

Maybe he will be gun-shy. Maybe he will have lost his appetite for the brutality of boxing. ‘There is no chance that I’ll be affected by it long term,’ Dubois says. ‘I have had to deal with setbacks before as an amateur. Big fights, big tournaments, I was expected to win and I have lost. So I’ve got to do the same here again and pick myself up. This is nothing new for me.

‘I can’t make the same mistakes again. I’ll mature from it, grow up and see this boxing game for what it really is, how cruel it is. And I have to be just as brutal. Maybe there was complacency. There was a lot of hype. Maybe I started to believe some of it. The whole thing was a learning experience. Maybe there were things I’d have done differently but I have no excuses. 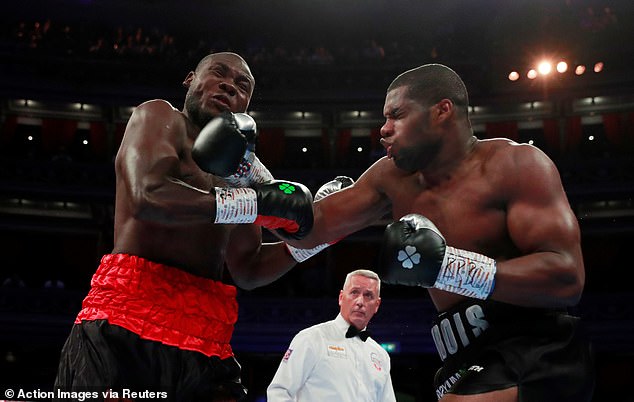 ‘I’m excited about getting back in the ring. It’s back to life. This is what I love to do. I have a passion for this game. I’ve still got a lot more I can do. There are big fights I want to have and great fights I can be in. This is my second chance.’

He will have been out of the ring for six months by the time he returns and as boxing fixes its eyes on the proposed fight between Anthony Joshua and Tyson Fury, the return of Dubois will be a sideshow. Dubois is happy about that, too. He says it has given him the chance to work away from the glare of expectation.

‘It has felt like going back to the beginning,’ he says. ‘Going to the gym and practising my boxing, concentrating on my work, learning, going back to the basics like I just turned pro. I want to do it like that, start completely fresh. I’ll be looking to impress like never before when I start my comeback and shake off the cobwebs.

‘Once I have got that out of the way, I will be raring to go again and I have the hunger in my belly and I will really step on it and who knows what’s next. The demons of that last fight won’t come back when someone hits me. It wasn’t a shot that was going to knock me out. Joe wasn’t going to knock me out.

‘Nothing has shaken my faith in how dedicated I am to boxing. This has made me even more hungry. I have more to prove. Sometimes, things are there to give you a new path in life and a new goal and remind you what this is really all about. I’m ready for it all now.’