By Sami Mokbel for the Daily Mail

The Germany international underwent knee surgery earlier this year that ruled him out of the final games of last season.

Sportsmail understands Rudiger had pencilled in the clash against Wolves after the forthcoming international break to make his long-awaited return to action.

The former Roma centre half has stepped up his training regime at the club’s Cobham HQ, but is understandably keen to make sure his injured knee, which required surgery, is 100 per cent before returning to action.

But manager Lampard is keeping an even closer eye on Rudiger’s pending return following Sunday’s heavy 4-0 loss at Old Trafford.

Before the start of the season, Lampard privately stressed to Rudiger during talks at the club’s training ground about how important he viewed the defender to his plans.

The Blues boss is understandably eager to have his key man available as soon as possible as he looks to add solidity to he defence.

Kurt Zouma was singled out for criticism following the loss to United. 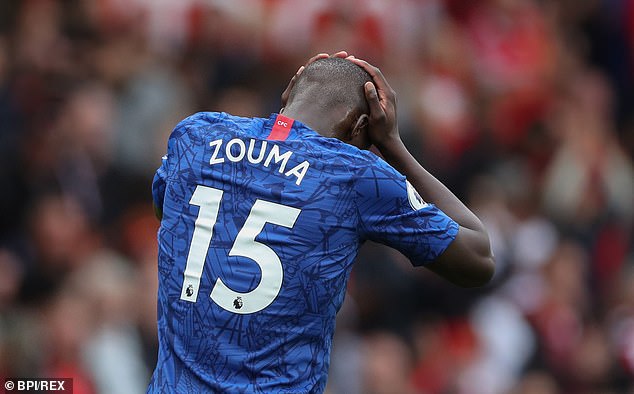 Having returned from an impressive loan spell at Everton last season, Zouma will have an important role at Stamford Bridge this season, particularly following last week’s departure of David Luiz to Arsenal.

However, Blues legend Gianfranco Zola – who was assistant manager under Maurizio Sarri last season, believes Zouma is fighting an uphill battle to keep his place.

‘I think he (Rudiger) has a better understanding with Christensen.

‘I believe if they want to play out from the back, Rudiger and Christensen will be more suitable.’