By Jeorge Bird For Mailonline

Chelsea manager Frank Lampard has revealed that he is relishing the chance to test himself against Liverpool boss Jurgen Klopp in the UEFA Super Cup on Wednesday night.

Lampard has entered just his second season in management, while Klopp, who he has much admiration for, has been managing since 2001.

The game in Istanbul will be Lampard’s first meeting against Klopp and also his first final as a manager.

The 41-year-old, who impressed as Derby boss last season, is full of admiration for Klopp and is looking forward to testing himself against a manager who won the Champions League with Liverpool last season.

As reported by Chelsea’s official website, Lampard said: ‘I love the challenge of going up against a man that I have so much admiration for as a person, in terms of his character and personality that we see from the outside and also the way his players relate to it.

‘Man-management can be as important as tactics and he is a man who knows how to get everything out of his players, the squad and the club. For me, to have the personal challenge as a manager to go up against him is an honour. 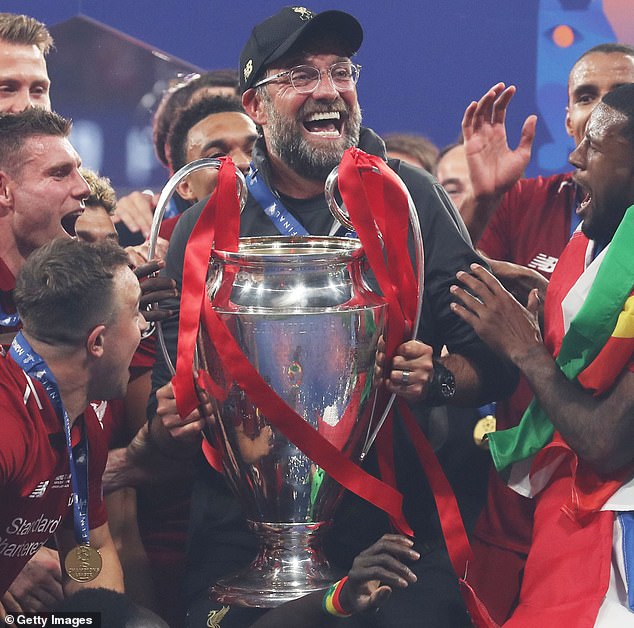 Lampard is full of admiration for Klopp, who won the Champions League last season

‘I’m proud to manage a club like Chelsea up against a club like Liverpool, against a manager like Jurgen Klopp. It’s a challenge that I want to get right and I want to try to win.’

Lampard’s Chelsea tenure got off to a disastrous start with a chastening 4-0 defeat away to Manchester United on the opening weekend of the Premier League season.

However, this game, against another high-profile opponent, represents an excellent chance for Lampard’s side to bounce back, while he could potentially secure his first trophy as a manager.

With Chelsea having been under a transfer ban this summer in addition to losing Eden Hazard, Lampard faces an unenviable task in his first campaign.

Victory against Liverpool, though, would provide his side with an injection of confidence when they return to domestic action.