Nearly 70 percent of the Earth is covered with oceans, but an animation reveals what our planet would look like if they all disappeared.

The clip simulated a drop in a range of sea levels that gradually reveals the two-thirds of land hidden underwater, with most of the area becoming visible at a decrease of 459 feet.

The central area of the ocean begins to appear at depths of 6,500 feet and by 19,685 feet, all of the sea water has drained –except for parts of the Earth with deep sea trenches.

The animation was created by James O’Donoghue, a scientist at the Japanese Aerospace Exploration Agency, who remade ‘an animation NASA made back in 2008, but at high resolution and with edited timing.’

The timelapse lasts for 51 seconds and land begins to appear around the continents first, with the most becoming visible off the coast of Australia and Asia.

Scroll down for videos

A round 70 percent of the Earth is covered with oceans, but an animation reveals what our planet would look like it all disappeared

O’Donoghue notes that at 459 feet below sea level, the continental shelves, the seabed surrounding large landmasses are uncovered.

And at 19,685 feet, most of the Earth has drained of its oceans, except for some areas with deep sea trenches.

This includes the Mariana Trench, which is around over 36,000 feet in depth and located in the Pacific Ocean.

The clip simulated a drop in sea level that gradually reveals the two-thirds of land that is hidden underwater, with most of the area becoming visible at with a decrease of 459 feet

The timelapse lasts for 51 seconds and land begins to appear around the continents first, with the most becoming visible off the coast of Australia and Asia

This animation simulates a decrease in sea level, but experts have predicted our world is headed for just the opposite as a result of climate change.

A report was released earlier this week that warns Greenland’s rapidly melting ice sheet will put 400 million people living in coastal regions at risk of flooding by the year 2100 if it keeps up its current pace.

An international team of scientists found it is melting seven times more rapidly than it did in the 1990s, putting a further 40 million people who live in coastal regions at risk.

The damning research predicts sea levels could rise more than two feet by the end of the century.

Dr Andrew Shepherd, a professor of earth observation at the University of Leeds, said: ‘As a rule of thumb, for every centimeter rise in global sea level another six million people are exposed to coastal flooding around the planet.

O’Donoghue notes that at 459 feet below sea level, the continental shelves, the seabed surrounding large landmasses are uncovered

As the sea levels drop, more land around the continents begin to show

‘On current trends, Greenland ice melting will cause 100 million people to be flooded each year by the end of the century, so 400 million in total due to all sea level rise.

‘These are not unlikely events or small impacts; they are happening and will be devastating for coastal communities.’

Around 100 scientists from 50 organizations surveyed the ice sheet between 1992 and 2018, using satellites to measure changes in volume, flow and gravity.

At 11,515, the coasts around all the landmass have been exposed with some areas of the Arctic showing as well

It is safe to say that at around 13,000 feet of a drop in sea level, more land is showing than ocean

At a decrease of 16,437 feet in sea level, there are only patches of ocean water on the planet, which are some deep sea trenches 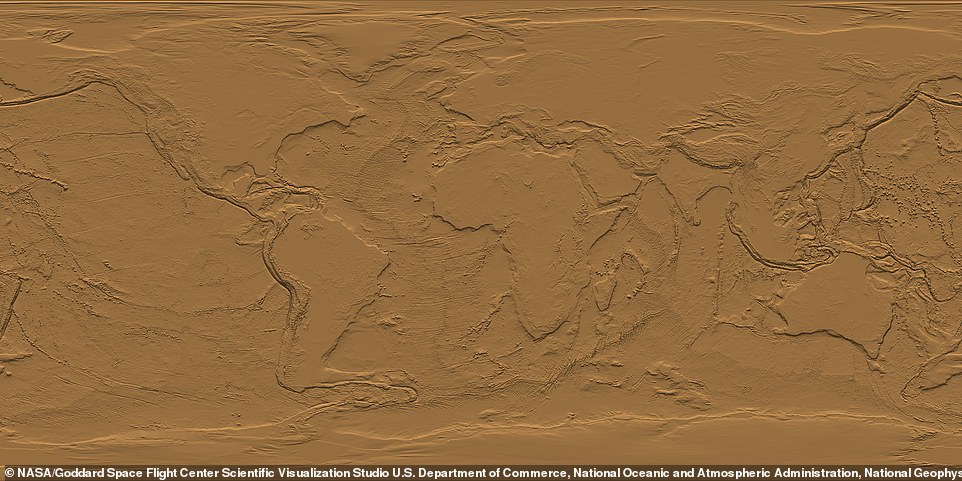 When all the ocean is drained, the only thing that remains are the raised levels of the continents GP data sharing: What is it and can I opt out? Astronomers spot a ‘blinking giant’ near the centre of the galaxy Windows 10 has built-in ransomware protection: how to use it Coins found in Poland may have been bribe to keep Vikings from sacking Paris over 1,200 years ago