Motorists setting off in their cars today take note – it is the most hazardous day on the road for drivers with a crash set to occur every 8.57 seconds.

The warning comes following new analysis by Privilege Car Insurance showing that UK drivers have had an average of 10,075 collisions on this very date, every year over the past six years – more than on any other day of the year.

This equates to an average of nearly 420 collisions per hour, seven crashes every minute, or one every 8.57 seconds across the country on 16 January.

Danger month: Insurance data has suggested that today is when most crashes tend to occur on UK roads – and figures claim that January is the month when claims spike

A Ford hit from behind in Belfast or Manchester is the most likely scenario, according to the insurance provider.

The Privilege report concludes: ‘Drivers should consider their safety more than usual today, as new research shows that the 16 January is the date when most traffic accidents are likely to take place.’

Analysis also found that a hit to the rear is the most likely type of collision to occur today.

This is followed by a single vehicle incident, one’s own vehicle hit when parked, a collision when turning, hitting an object such as a lamp-post or bollard or a a two or more car pile-up.

Ford cars are most likely car to be involved in a bump followed by Vauxhall, Audi, Volkswagen, BMW, Peugeot, Renault, Nissan, Mercedes and Toyota, says the Privilege report.

Poor concentration were the biggest factors cited by respondents for causing a crash at 24 per cent.

Most hazardous days for drivers

This is followed by bad weather, poor visibility and tiredness were the biggest factors.

Other reasons include being distracted by a child passenger, speeding and listening to music too loudly.

The data also revealed that more than one in ten of 18 to 34-year-olds who have caused a collision said they did so by putting on make-up while behind the wheel.

The UK’s obsession with eating-on-the-go could also be affecting our safety, one in ten of the same age group blamed eating and drinking while driving for their incidents.

Older drivers over-55s age group appear least focused on the roads, with nearly a third of those in this age group who caused a prang blaming poor concentration.

However, they are also the most speed aware, causing the lowest number of collisions due to speeding.

In London, shunts to the rear are particularly rife, with eight out of ten of drivers involved in knocks where they weren’t at fault reporting this as a cause, compared to just half in Yorkshire and Humberside. 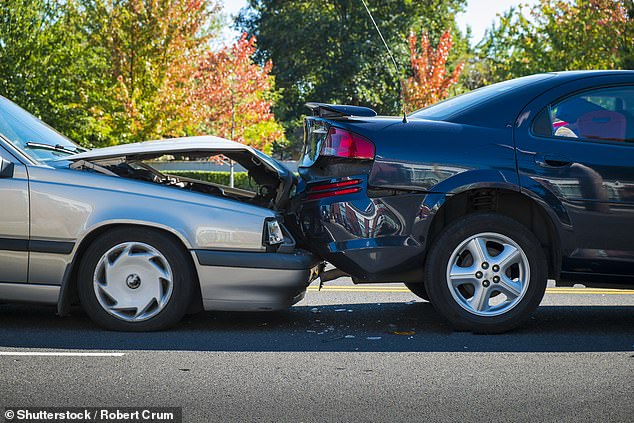 A Ford hit from behind in Belfast or Manchester is the most likely scenario, according to the insurance provider

Nearly a third of drivers in the East Midlands say they were the cause of a collision – the worst performing region.

Drivers from Belfast appear to be most accident prone with 70 per cent having been involved in a prang, followed by Manchester, Cardiff, Edinburgh, Liverpool, Leeds, Sheffield, London, Birmingham and Nottingham.

By contrast, drivers from Bristol are the safest in the country with just 45 per cent having been involved in a scrape on the roads.

Women are the safer driver of the sexes, with a fifth admitting they were to blame for a smash compared to a quarter of men.

When it comes to parking manoeuvres, women also come top, with over three quarters of them never having caused a collision while reversing compared to six out of ten men.

Charlotte Fielding, head of Privilege Motor Insurance, said: ‘We know that January can be a tricky time of year for drivers.

‘Difficult weather conditions, fewer daylight hours plus, being back to the grind after Christmas can take its toll, leaving drivers feeling fatigued.

‘A few simple measures can reduce unnecessary stress levels and reduce the risk of collisions.

‘Before you set off, ensure you have left enough time for your journey and if it is an unfamiliar route, programme this into your sat nav.

‘If you can, take 15-minute breaks every two hours on longer journeys and keep your distance from the car in front, as this will give you extra time to react.’

A black box insurance provider has backed Privilege’s claims, claiming that five of the 10 riskiest days of the year to drive fall in January.

Insurethebox, a telematics insurer that tracks young motorists’ activity behind the wheel, said drivers with their policies have been found in recent years to most likely make a claim between the 12 and 20 of January.

Gary Stewart, service manager at insurethebox said: ‘Analysis of over 5billion miles of driving data shows our customers do drive less in January, however when your look at the percentages of claims being made against the miles driven, this month is in fact the riskiest of the year to drive.

‘With its shorter, darker days and often freezing temperatures, January has some of the most challenging driving conditions of the year especially the further North you go which probably explains why drivers in Scotland see accidents increase by almost a third this month.’ One of Britain’s oldest department store chains crashes into administration