Stunning images taken by an amphibian and reptile expert reveal the mysterious hidden world of some of Earth’s most dangerous cold-blooded animals.

The incredible photographs showcase a range of animals found on all continents – except Antarctica – and include the bright eyes of an albino alligator, the well camouflaged Satanic Leaf-Tailed Gecko and the luminous underbelly of the Purple Harlequin toad.

Mr Kuijpers childhood passion for photography and wild animals saw him leave school to go to Madagascar and work with reptiles and amphibians and up to 30 of the creatures in the book are considered as vulnerable or endangered. The pictured Masobe gecko (Paroedura masobe)  is a small animal that is endangered and found in Madagascar 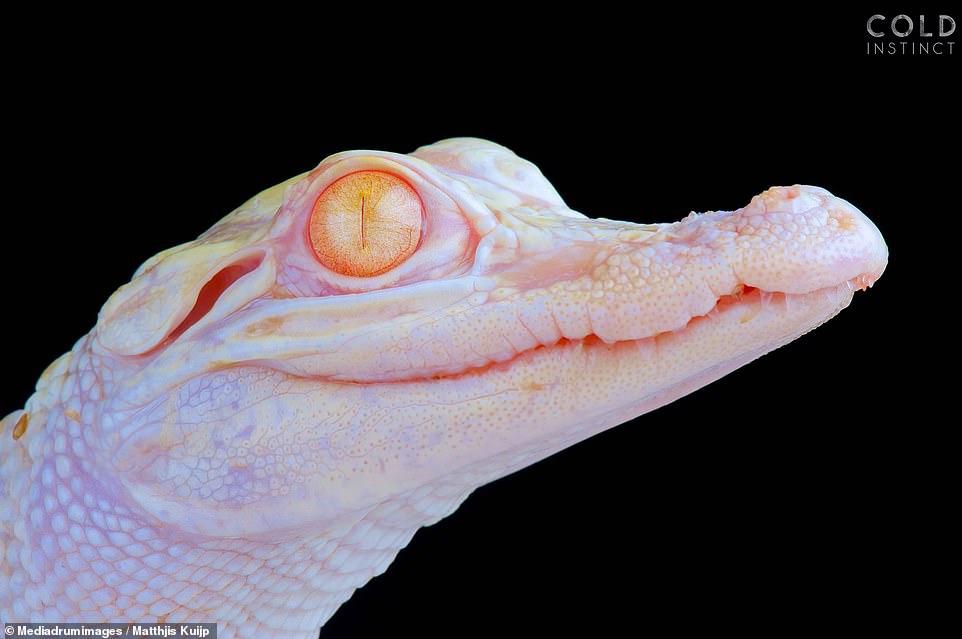 The photo shows an Albino alligator (Alligator missippienssis) photographed in captivity in the Everglades, North America and featured in the book, Cold Instinct. Also known as the white alligator, it is native to the Louisiana swamps and is one of the rarest animals in the world, with only 12 known to exist 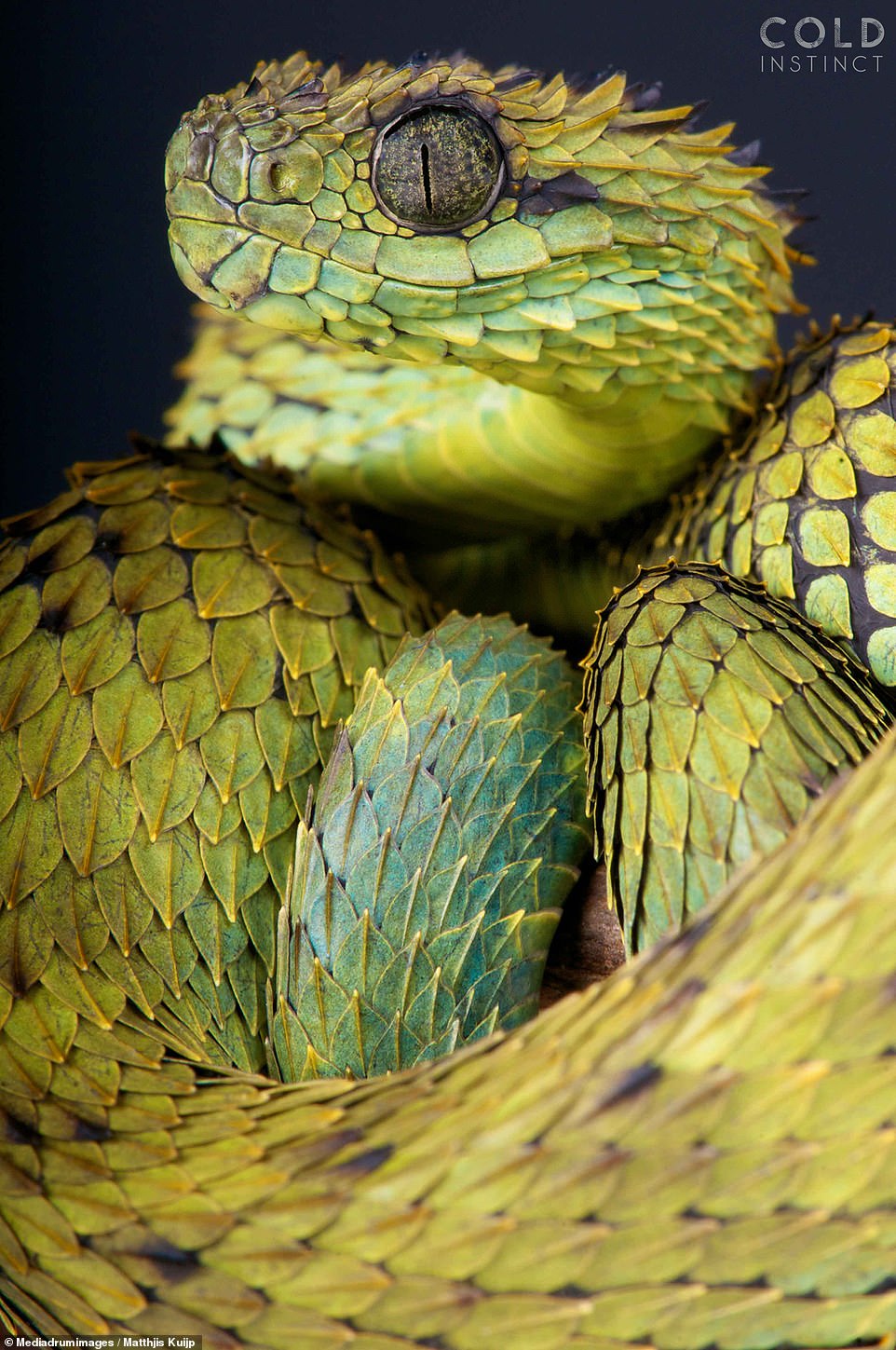 Mr Kuijpers says he has had some near-death experiences, including being bitten by a venous snake. Pictured is an Atheris hispida, a venomous viper species found only in  Central Africa with distinct upturned scales and a bristly appearance. The  venom is mainly neurotoxic and a bite can be fatal to humans. There have been reports of bites that have led to severe haemorrhaging of internal organs 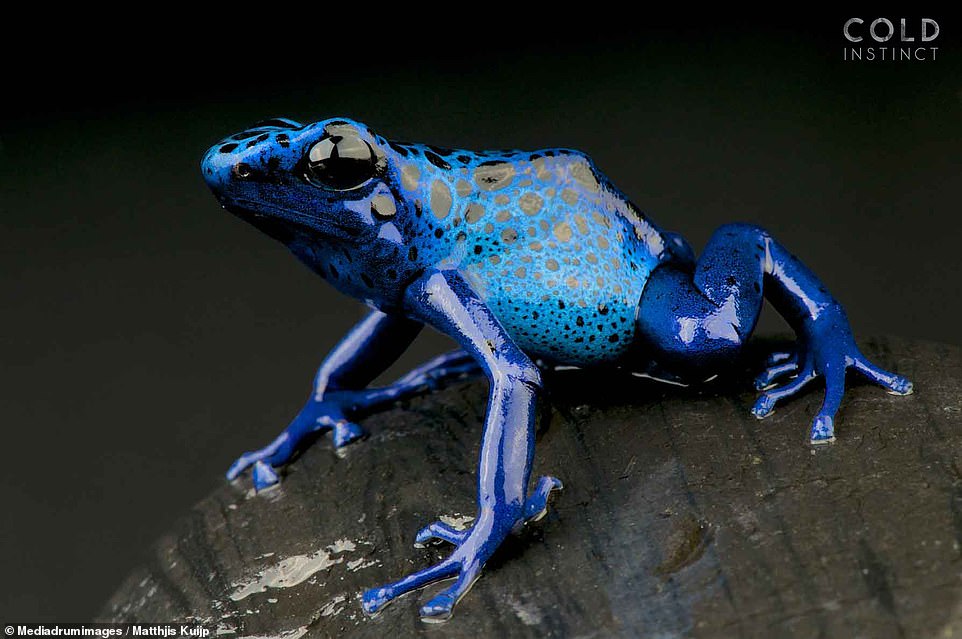 The book features 72 creatures in total and the image above shows an Azure dart frog, which is found in Suriname in South America. Its black spots are unique to each animal and can be used for identification. Some regard it as its own species but others consider it to be a variant of the dyeing dart frog which is classed as ‘least concern’ by the IUCN

He has spent the last 30 years travelling in search of these species and a total of 72 animals are included.

‘Amphibians might look scary at first, but they are much more vulnerable than they appear,’ states the info on the Kickstarter page.

‘Their survival is challenged daily by threats of climate change, pollution and poaching. Habitat loss is the greatest threat to cold species in Europe.

‘Some reptiles and amphibians have cleverly adapted to the threatening conditions, but they are in constant need of protection. 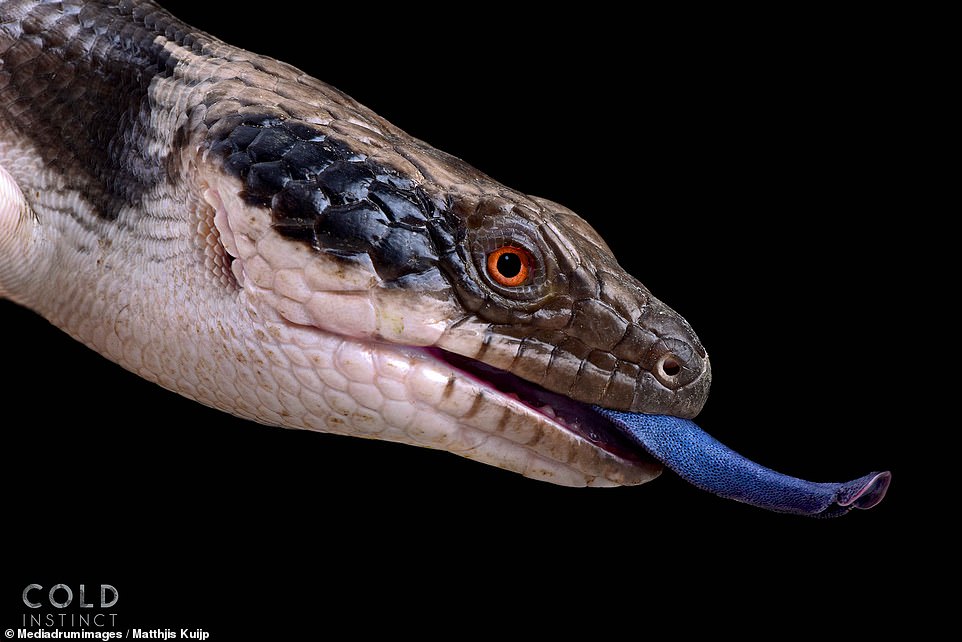 Photographer Matthijs Kuijpers spent the last 30 years travelling the world in search of bizarre species. The image above shows one of the species in his book, a western blue-tongued skink lizard that is native to Australia but can also be found in nearby New Guinea and Indonesia. They give birth to approximately 5 live young immediately eat their own placental membrane 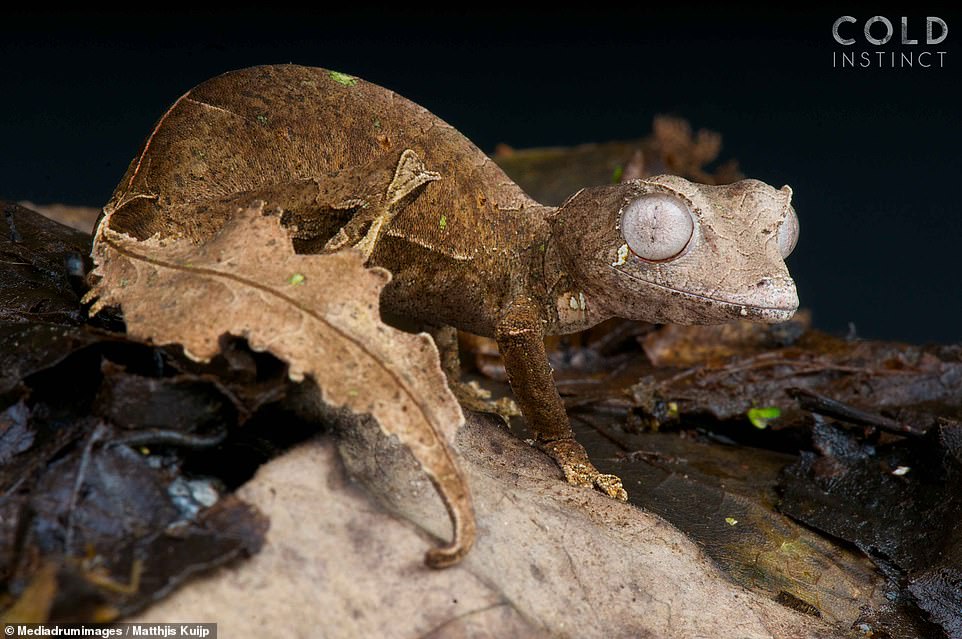 Many of the photos show bizarre looking creatures such as this Satanic leaf-tailed gecko (pictured), a species from Madagascar. It is classed as ‘least concern’ by the IUCN and population numbers are stable. It has a tail mimicking a leaf with large eyes that allow them to hunt at night 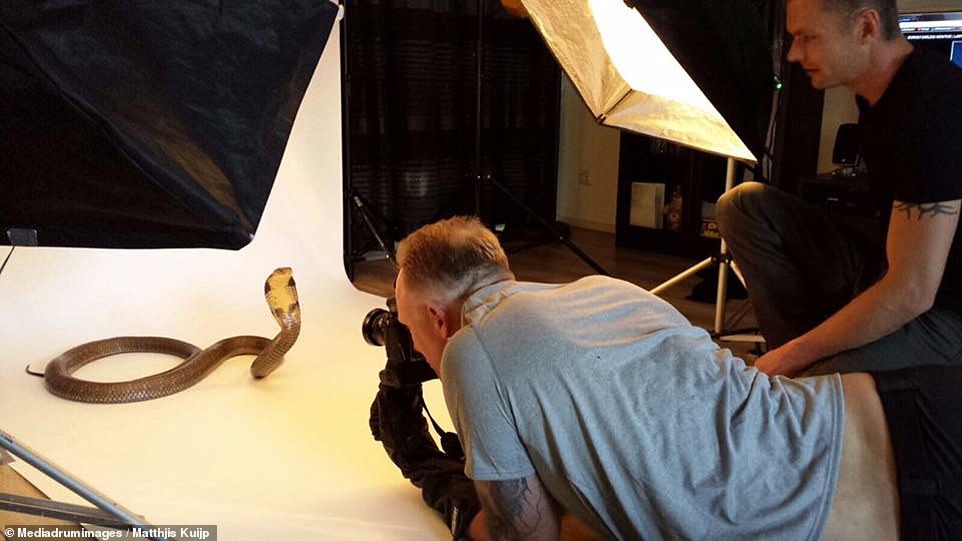 Mr Kuijpers (pictured, left) says that he always photographs in the local region where the animals are found. He said: I photograph everywhere in the same style, rain forest with a mobile flash installation or mobile studio in the western world’ 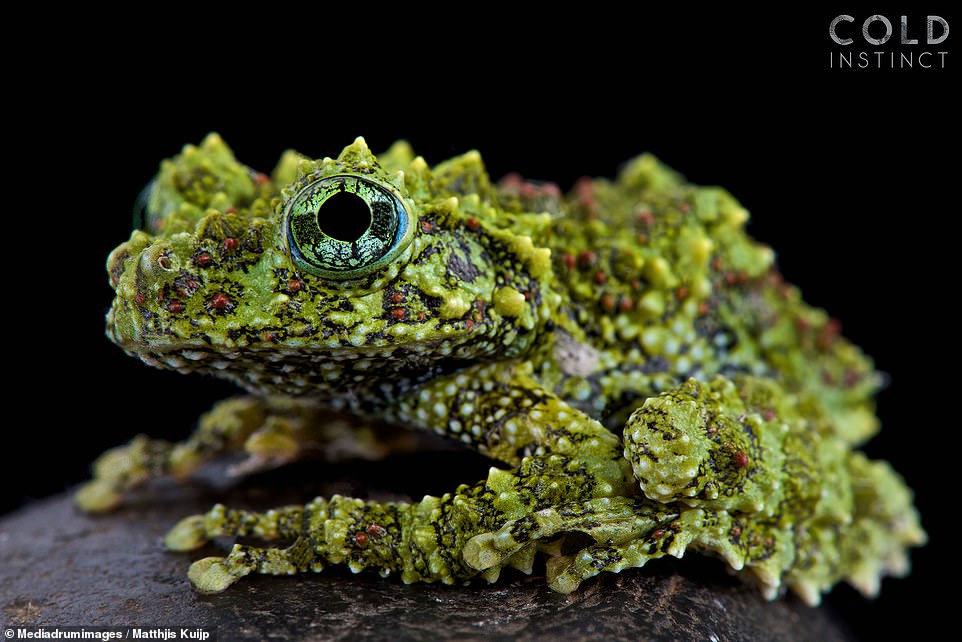 Mr Kuijpers wants his photos to focus on the animal and remove stereotypical ideas. The image above shows a Vietnamese mossy frog (Theloderma corticale), found in its native home of Vietnam. Its unique appearance helps the 3.5-inch long animal camouflage and avoid predation 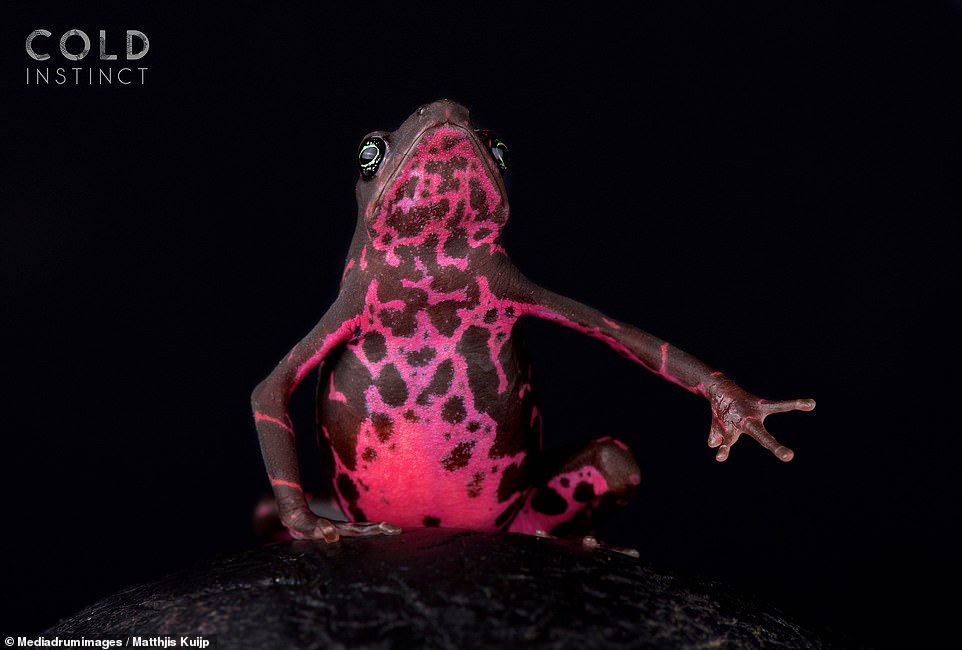 According to the book’s page on kickstarter, the photos featured showcase some of the most peculiar animals the author has witnessed. The image above is of a purple harlequin toad or ‘pink toad’ which the photographer lists as one of his favourite animals 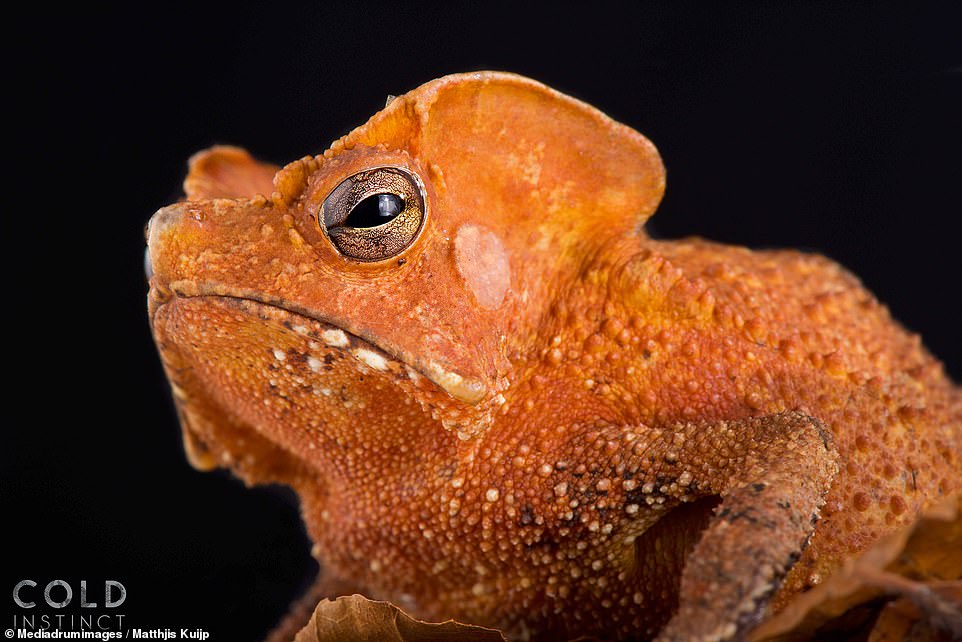 ‘Habitat loss is the greatest threat to cold species in Europe,’ writes the author on the Cold Instinct’s Kickstarter page. The image above shows a picture of the Guiana Shield Leaf toad, found in Suriname and French Guiana in South America which is recognised as being stable and of ‘least concern’, according to the International Union for Conservation of Nature (IUCN)

‘Our hope is to create awareness of just how much these little guys need our attention. We need to know how we can help protect them; but for that, we must learn more about them.

‘Did you know that about 86 per cent of species on Earth are still waiting to be found? Most of those creatures could become extinct before we get a chance to spot them.

‘Every year, approximately 18,000 new species are discovered and classified. We believe that about 20,000 species go extinct annually.’

The photographic project, Mr Kuijpers claims, is intended to counteract stereotypes associated with the animals.

He hopes by photographing their beauty in candid shots people will abandon the fear and negative thoughts that often surround them.

He left school to go to Madagascar and work with reptiles and amphibians and spent most of the last three decades working on the project. 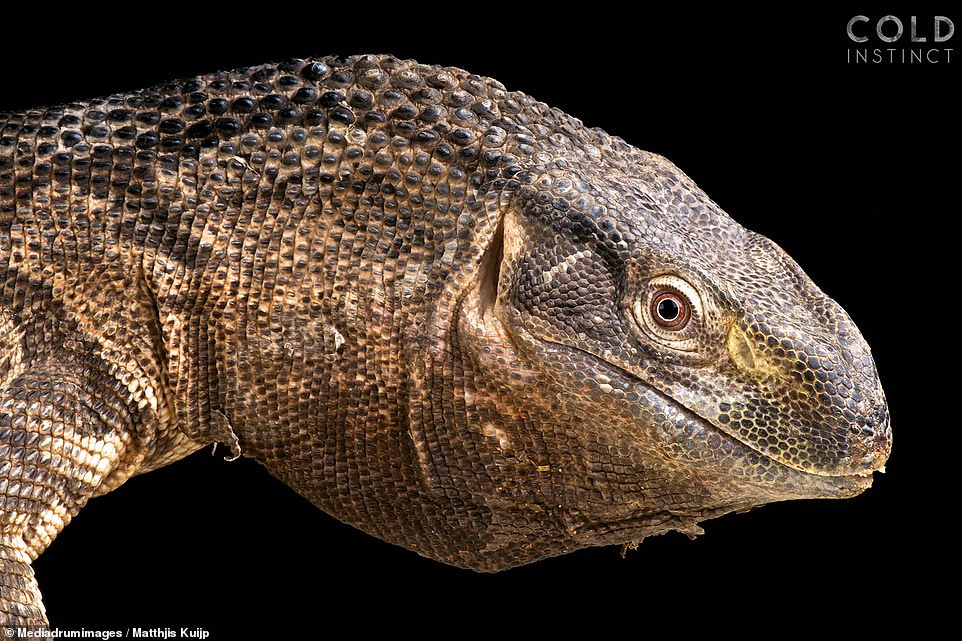 The picture shows a rock monitor (Varanus albigularis), also commonly called the black-throated monitor. It is commonly found in Central, East, and southern Africa. Large males can reach 40lbs in weight and stretch to 6 feet 7 inches in total length, including the tail 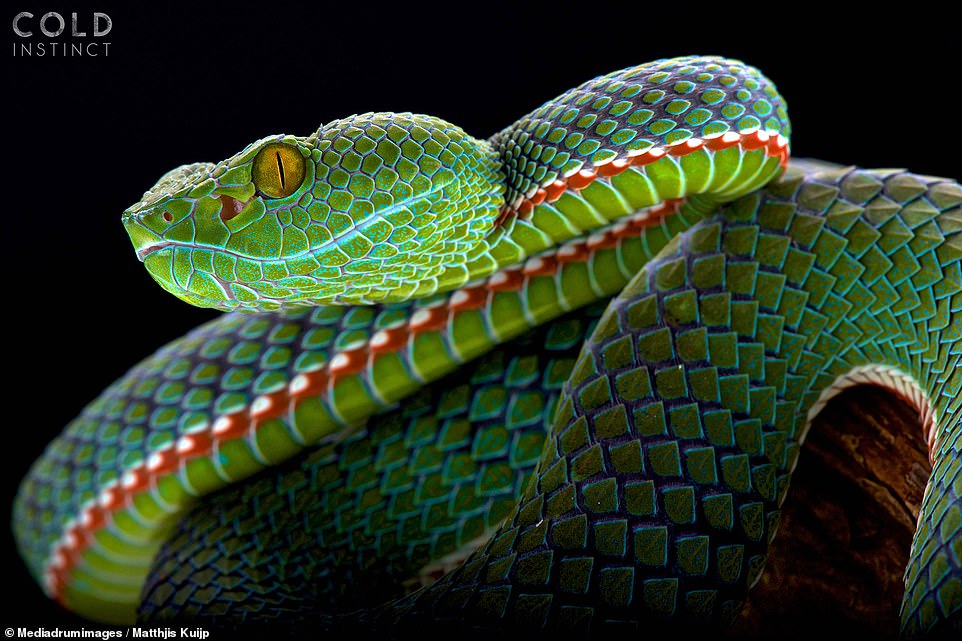 The photo shows a Siamese Peninsula Pitviper featured in the book found in Malaysia. It has a distinct red and white stripe that runs along the side of its body and a reddish brown tail and survives on a carnivore diet of lizards, amphibians, birds, rodents and other small mammals 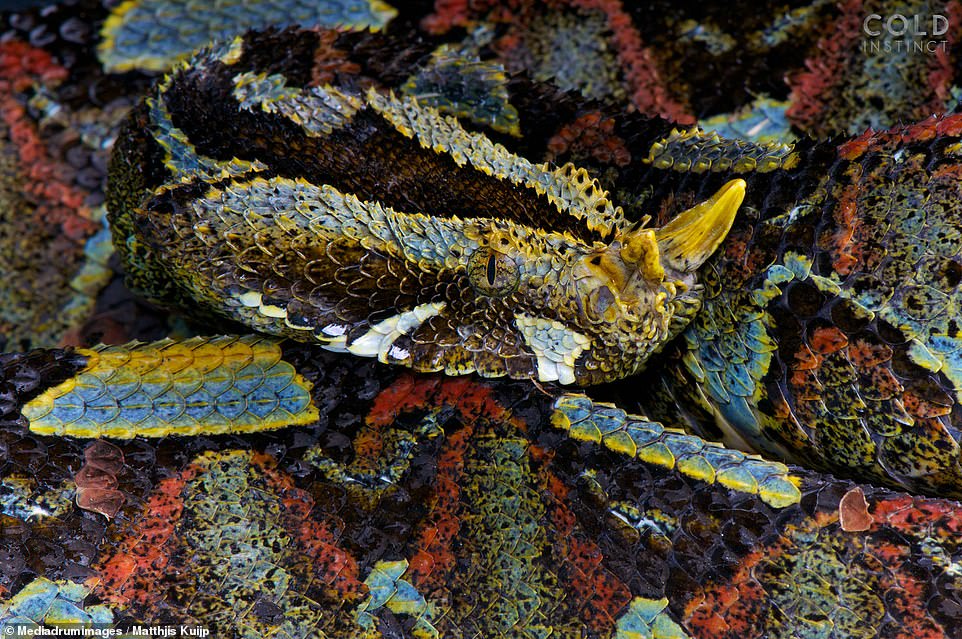 The image shows a Bitis nasicornis, a venomous viper snake also known as a river jack that is featured in Cold Instict. It is brightly coloured and lives in the rainforests and swamps of West and Central Africa. The reptile has a large body that averages 28–35 inches (70–90 cm) in length and prefers wet or damp environments. Their scales are rough and strongly defined. It produces a significant amount of venom but it rarely bites or causes death in humans 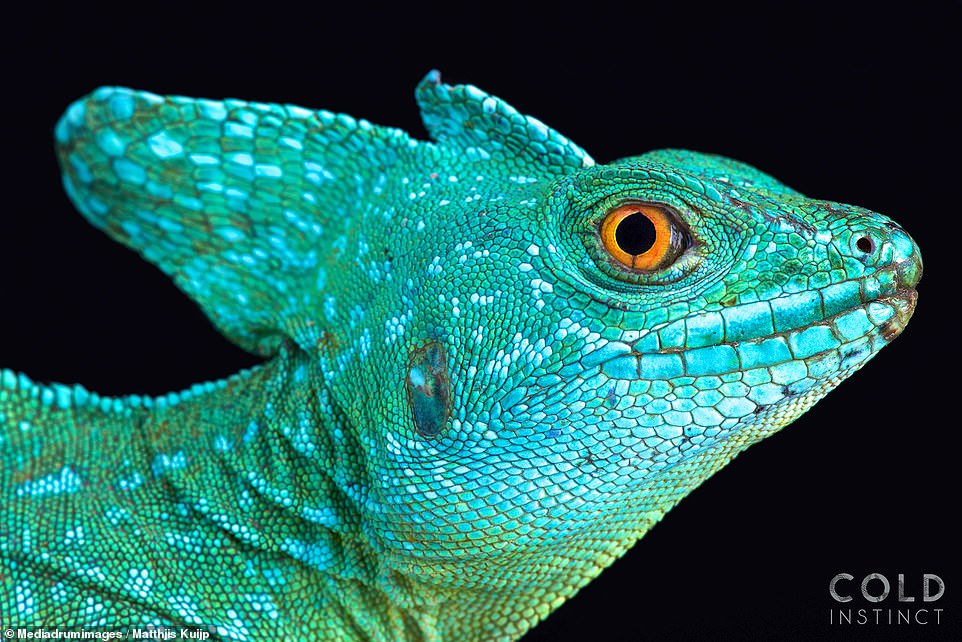 The image above shows a Plumed Basilisk, found in lower Central America in Costa Rica, Nicaragua and Panama along foliage areas by waterways. It has a mixed diet of insects, small mammals (such as rodents), smaller species of lizards, fruits and flowers 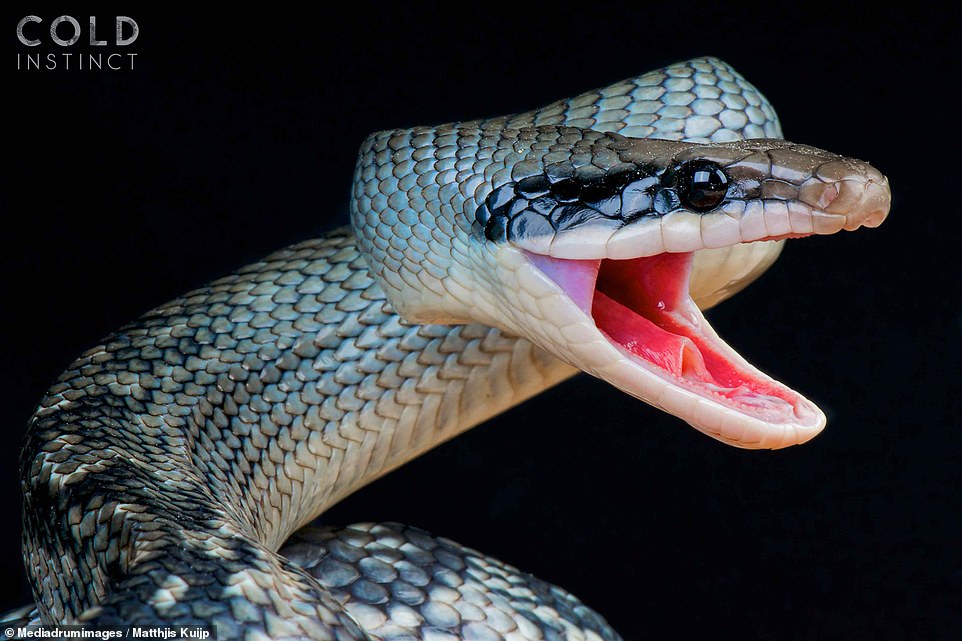 The image shows a Beauty rat snake (orthriophis taeniurus) that has a long and thin body and is native to eastern and southeastern areas of Asia such as Taiwan. Living about 15–25 years, the average length of the beauty rat snake (including the tail) is about 4–6 feet 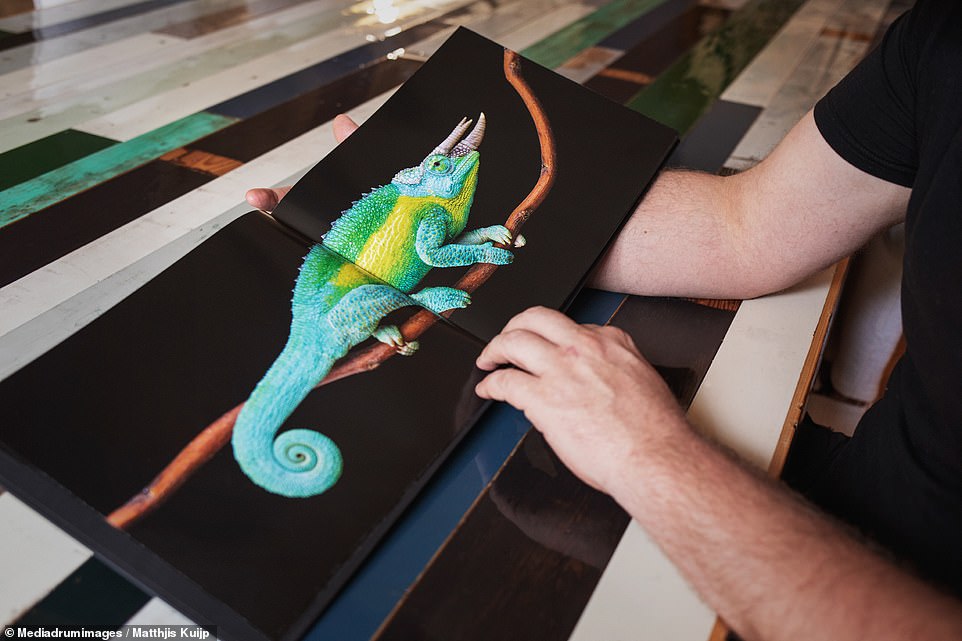 ‘Our hope is to create awareness of just how much these little guys need our attention’, said the book’s creator. The image above shows a page in the book of a Jackson’s chameleon, a colourful creature native to East Africa. The creature has since been introduced to Hawaii and other parts of North America. it is considered to be of least concern by the IUCN and lives in woodland at altitudes of up to 8,000 feet 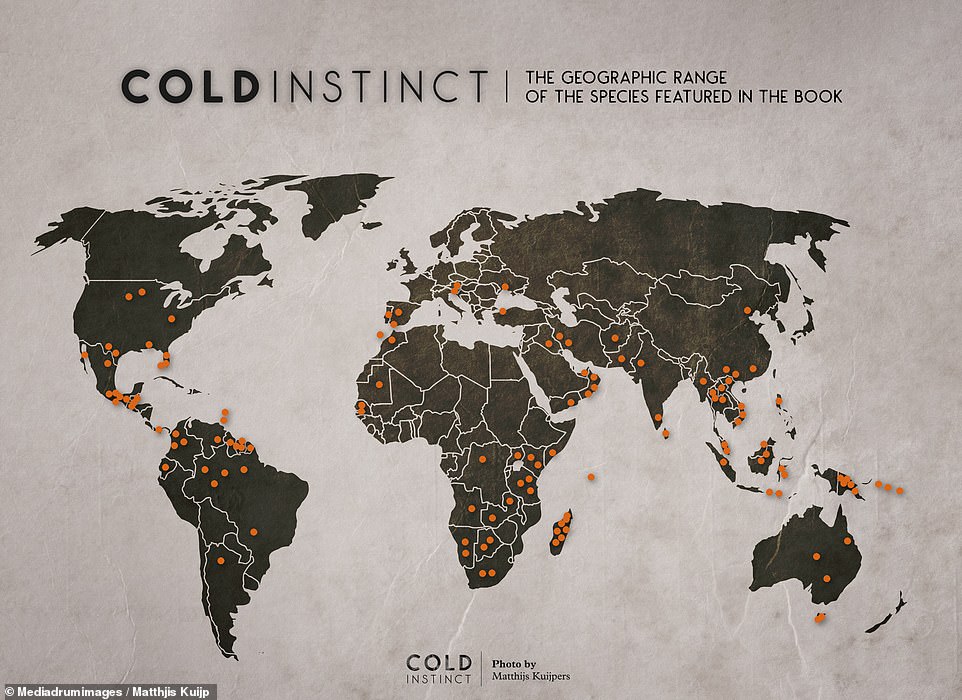 The book Cold Instinct has already exceeded the £9,300 pledge goal that would allow it to be put into print. There are 37 days to go until the end of the pledge.  The photo shows the map of all the locations where the 72 creatures featured are found in the world 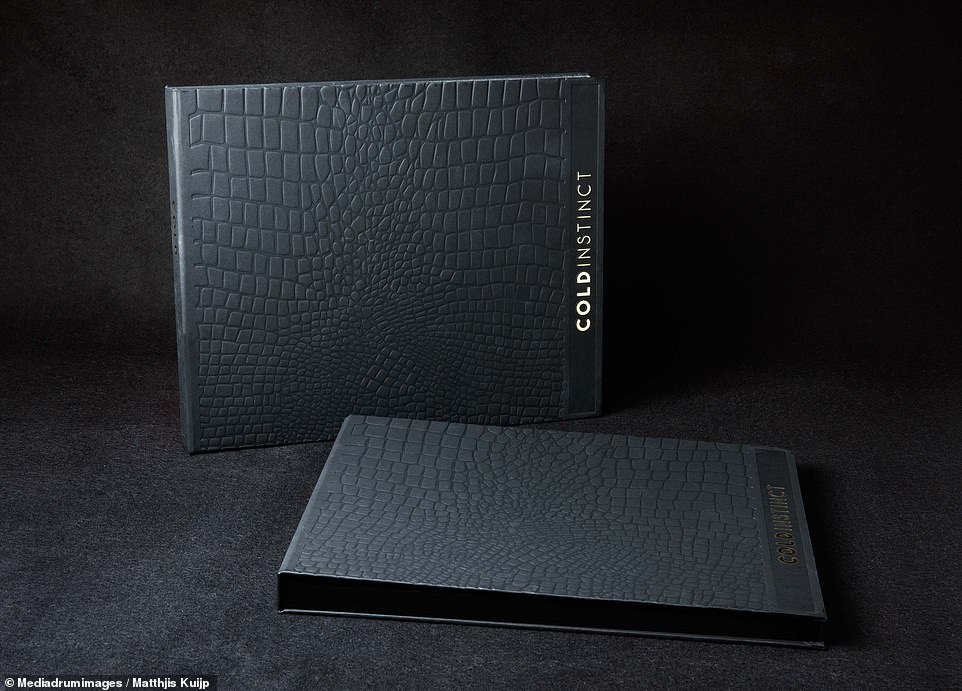 Cold Instinct (pictured) is described as ‘a photographic book of unparalleled quality with shots of shockingly beautiful snakes, iguanas, geckos, toads & more’ on its Kickstarter page. The book is 152 pages long and features 72 different species

Species on the endangered red list are animals of the highest conservation priority that need ‘urgent action’ to save.

Last year, in the UK, several more species were added to the list. Vodafone is down: Network is described as a 'shambles'