Steven Gerrard meets nine-year-old Liverpool fan a year after tragic death of the boy’s father, 26, who had dreamed of taking son to meet his hero

By Joel Adams For Mailonline

Steven Gerrard made the day of a young Liverpool fan whose dad tragically died aged 26.

Robbie Fleming was found dead at his home in Lisburn, Northern Ireland after suffering from depression. The father-of-one was a big Liverpool FC fan who dreamed of meeting Steven Gerrard with his now nine-year-old son Jack.

One year on from his sudden death, Robbie’s mother Alison told the Liverpool Echo of her heartache and how much it would mean to their family if Robbie’s hero could send a personal condolence to her grandson Jack.

Gerrard read about the family’s plight and arranged to get in touch, which then led to a face-to-face meeting.

Alison said: ‘Robbie and Jack were desperate to meet Steven but Robbie never got to meet him.

‘It would give me a bit of comfort to know that he knows how much Robbie loved him.’

Alison, her father Vernon, Robbie’s brothers Jamie and Jordan, Jack, and his mother Nadine had their dreams come true when they met the former Kop idol in Liverpool.

Flying out from Belfast, the family-of-six arrived in the city for a three-day adventure.

On Friday afternoon, the family were taken by a private chauffeur to meet the Reds legend.

Originally, they were meant to meet at the a golf resort but due to a road traffic collision, they had to switch venues – ending up in a local Starbucks.

Alison said: ‘There was not a person there, it was just us. I think he must have phoned up beforehand to ask for the privacy.’ 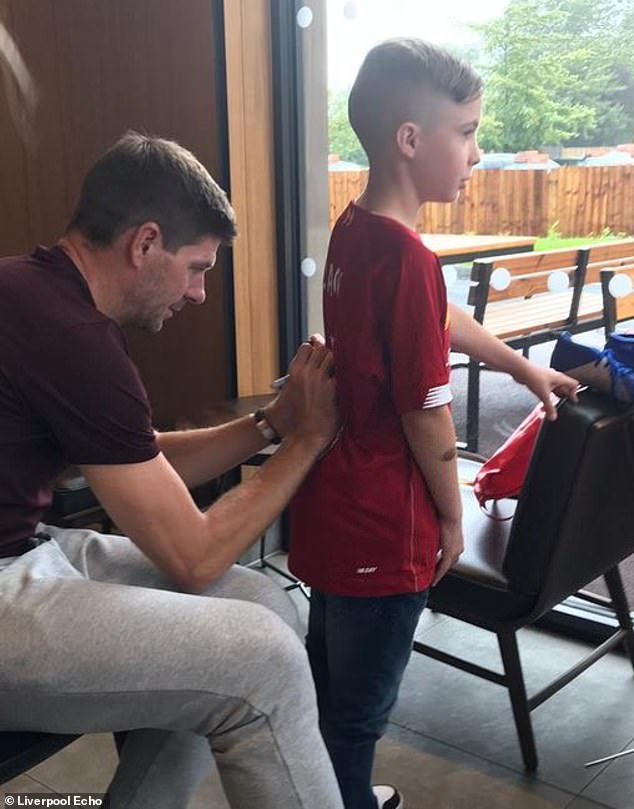 During the 45-minute meeting, Gerrard offered to buy the family whatever they wanted to eat and drink and signed a number of pieces including Jack’s Build-A-Bear named after his dad, football shirts and an autograph which will be added to Vernon’s tattoo in tribute to his son.

Alison said: ‘I first saw him coming through the door and Jack’s face we will never forget it – it was priceless.

‘His face just beamed, he had such a smile and his wee hands were shaking.

‘But once Steven came in and shook his hand and he saw how down-to-earth he was, Jack just talked away.’

While were delighted to meet the star, Alison and Vernon also found the moment very emotional.

Alison said: ‘It was a bit of a bittersweet moment, as all me and my husband could think of was how happy Robbie would have been to meet him.

‘I got very emotional and tried to hold back my tears, but unfortunately I was unable to.

‘I’m so happy we managed to get hold of him and make our son known to him.

‘I hope our son is smiling down and happy that me and his dad managed to succeed in this.’ 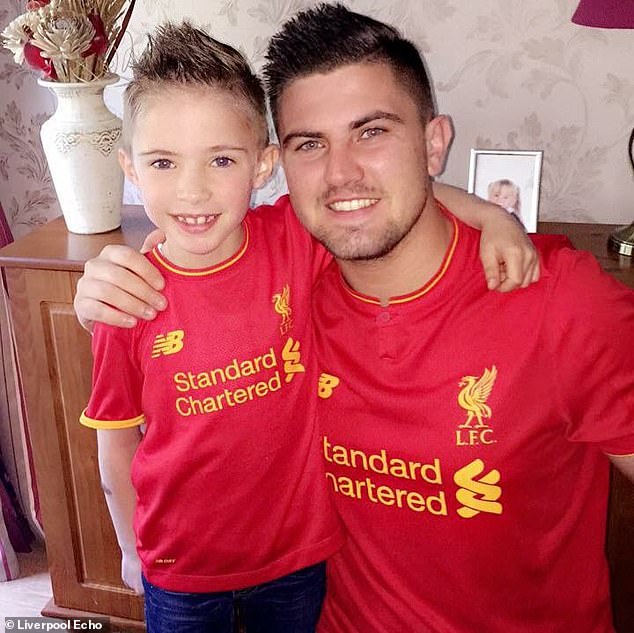 Robbie’s mother, Jack’s grandmother, couldn’t help but cry during the meeting at how much Robbie (right, with Jack) would have wanted to be there but said: ‘He has helped me with my son’s death because I now know I have done something that Robbie wanted to do’

Gerrard gave the family six tickets to Liverpool’s first Premier League game of the season at Anfield – where the Reds’ beat Norwich City 4-1.

‘It was an experience of a lifetime that we will never in our lives get again and it is so special because it is all in the memory and name of our son.

‘I know that we wanted to make him proud and do something that he wanted so we have now partly fulfilled this by getting Jack there.

‘And we have made him known to Steven and how much of an icon he was to Robbie.’

She added: ‘I one hundred per cent can’t wait to come back, but to meet Steven Gerrard is a whole new level.

‘He has helped me with my son’s death because I now know I have done something that Robbie wanted to do.

‘People might think it sounds stupid but it means so much to us, it was so special.’ Aces coach Laimbeer surprised by ‘Land of the Lost’ stars