Shares in Just Eat surged more than 20 per cent after the takeaway delivery company confirmed it had reached an in-principle deal to merge with a Dutch rival.

The £8.2 billion all-share transaction with Takeaway.com will create a business big enough to take on the likes of Deliveroo and Uber Eats, processing 360 million orders worth £6.6 billion a year.

Amazon’s £575 million investment in Deliveroo effectively raised the competition stakes and perhaps even provided a catalyst for the combination, analysts said.

The Anglo-Dutch coupling provides vindication for activist investor Cat Rock Capital, which has been lobbying for this sort of pairing since taking a stake in Just Eat, whose investors will own 52 per cent of the enlarged group.

‘Activism is on the march in Europe and we can expect further agitation from investors to deliver more value,’ said Neil Wilson of Markets.com.

‘The more the likes of Cat Rock and Elliott pull the strings successfully, the more activists will be on the prowl. It could open up a bidding war now for a prize asset that needs some help.’

Just Eat’s chairman Mike Evans will maintain his role at the combined group, while Takeaway.com chief executive, Jitse Groen, will take over day-to-day running of the enlarged business.

Analysts warned against complacency as the merger isn’t exactly a slam dunk.

It’s possible we could see competing bids for Takeaway.com from technology investors Naspers and Softbank alongside offers from Delivery Hero and Uber. 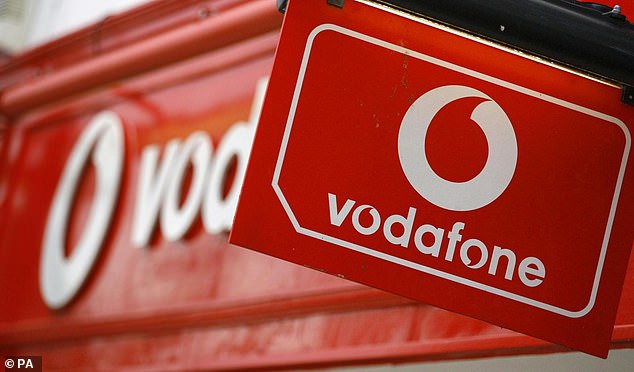 Vodafone was up 4.3 per cent, or 6.24p, to 152.24p as the market began to price in the positive impact of the sale or demerger of the telecom group’s masts business

Talking of activist investors, reports that Nelson Peltz is leaning on Ferguson to offload its UK business had the plumber’s merchant’s share price spurting up 2.3 per cent, or 142p, to 6300p.

Sanne Group shares slumped by more than a third after the fund administrator cut its earnings guidance.

It won a record £16 million of business in the six months to the end of June, resulting in underlying revenue growth 13 per cent. The problem? Two words: profit margins, which will be lower than anticipated.

Both JP Morgan Cazenove and RBC cut their recommendations on the stock. Sanne had been a top pick for the latter. The shares closed down 33.8 per cent, or 254p, at 498p. 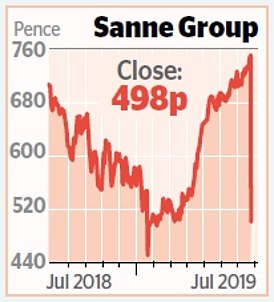 Vodafone was up 4.3 per cent, or 6.24p, to 152.24p as the market began to price in the positive impact of the sale or demerger of the telecom group’s masts business.

Astrazeneca (up 4 per cent, or 275p, to 7180p) benefited from a price target upgrade by the influential drugs team at Deutsche Bank. This followed last week’s upgrade to earnings guidance.

The wider drugs sector was given a pep as it emerged that Viagra-maker Pfizer was combining its Upjohn business with that of copycat drug maker Mylan.

There were multiple upgrades for Pearson, the formerly troubled educational publisher, which now seems to be seeing some traction for its digital strategy.

Stepping away from the Footsie, investors in Ryanair heaved a sigh of relief after first-quarter results that could have, in the opinion of some in the Square Mile, been a lot worse than they actually were.

Hit by turbulence caused by Brexit, German competition and the grounding of its 737 Max fleet, a 24 per cent slump in profits was seen as a decent result, particularly after the group maintained its earnings guidance. The shares closed the session 0.7 per cent, or 0.07 cents, down at ¤9.88.

Cranswick brought home the bacon in the first quarter after an outbreak of swine fever in China boosted Asian demand for the UK group’s pork products. The shares advanced 7.9 per cent, or 204p, to 2780p, as the meat processor also announced it had bought Katsouris Brothers, a Mediterranean sausage maker, for £43.5 million. Lord Rose ploughs a chunk of his cash into Netwealth