For Rangers, a blustery afternoon on the Fife coast was the equivalent of some calm before a looming storm of more significant challenges.

A routine progression to the quarter-finals of the Betfred Cup delivered positives through three goals and three debuts. After making no fewer than 10 changes to his starting line-up, there was no requirement for Steven Gerrard’s rejigged side to sparkle in overcoming League One opposition.

Even so, the job was still done with only the briefest hints of drama. And, for Filip Helander, it became an occasion he will recall with affection even after it has long faded from the memories of more passive observers. 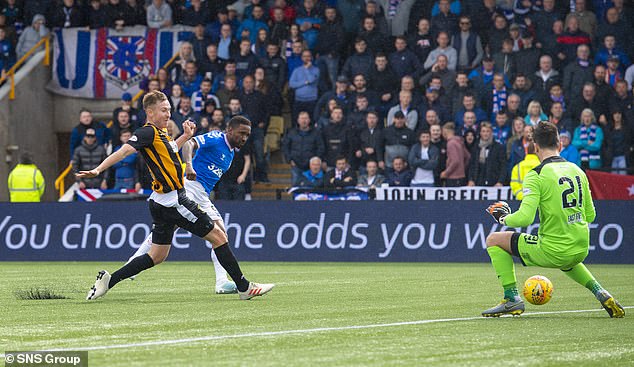 At £3 million, the Sweden centre-back is the most expensive of all of Gerrard’s ten summer additions. The Ibrox manager believes that outlay might prove a defensive bargain, yet it was the more forward-thinking aspects to his game that marked Helander’s first competitive appearance in a Light Blue shirt.

An assist for Jermain Defoe’s first-half opener was followed by a header that cannoned into the net via East Fife counterpart Ross Dunlop. You can be certain Helander will seek to claim a debut strike rather than it being logged as an own goal.

Andy King and Brandon Barker both appeared from the bench to make their bows during the second period, allowing Gerrard to get some minutes in legs ahead of a sizeable fortnight of fixtures.

From the quaint surroundings of Bayview, all beach views, solar panels and three empty sides, Rangers head into the heat of Thursday night’s hostile away leg of their Europa League play-off against Legia Warsaw.

After that it’s a short Premiership trip to St Mirren and the return match against Legia before an eagerly anticipated first Old Firm match of the season on September 1. Come through those unscathed and Rangers will be entitled to enter the international break bouyant with belief. More telling judgements can be made by that point.

As it is, Gerrard’s side have already scored 30 goals already this term – with Joe Aribo notching the third here – and are now up to five straight wins. 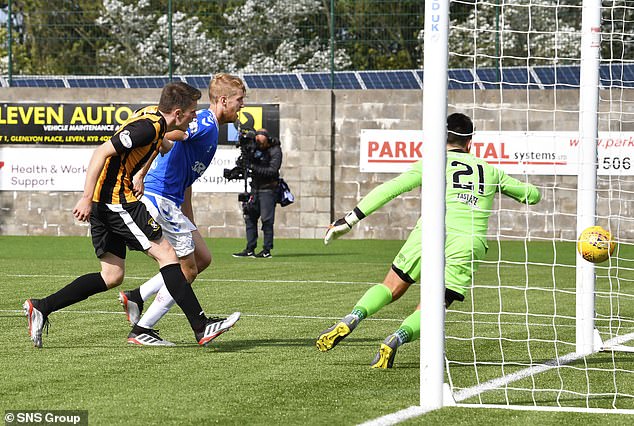 East Fife beat Dundee United and drew with Hearts to get out of their group and, to their credit, refused to simply roll over. Bar one first half chance, however, Darren Young’s part-timers never threatened what would have been a seismic shock.

A look at the substitutes further emphasised the current size of the Ibrox squad. Niko Katic was the sole figure among them to have also featured last Thursday evening.

Katic was joined there by compatriot Borna Barisic. When Croatian left-back isn’t used at Bayview – having been left out for both legs against Midtjylland – it suggests his attempts to win Gerrard’s trust have fallen decidedly flat.

As it was, the selection overhaul led to a disjointed opening. On a plastic pitch that threw up showers of black pellets, Gerrard’s fringe picks were slow in finding fluency.

They felt referee Don Robertson should have helped to ease any early tension. Jordan Jones surged beyond Stewart Murdoch and toppled when the full-back scrambled back at him near the touchline. The winger appealed for a penalty, as did captain-for-the-day Andy Halliday as he raced forward to air his thoughts. Robertson, though, was unmoved by the chorus as he signalled a goal-kick. 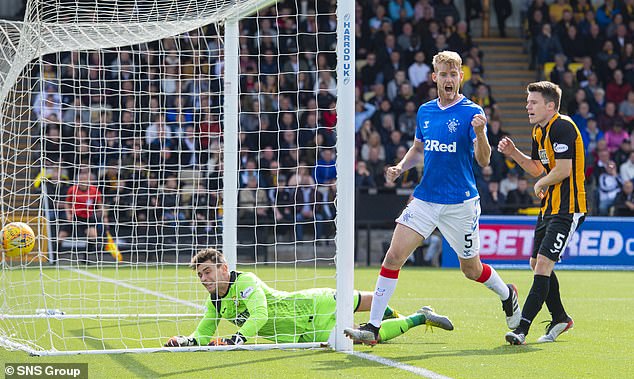 Some neat play then led to Defoe having a near-post thump saved by East Fife goalkeeper Jordan Hart, who has ambitions to pursue an alternative career within politics.

Gerrard, however, was irked by some of the on-field policies his players were adopting – particularly in a 15th minute sequence that very nearly saw East Fife snatch the lead.

Not for the first time, Kamara gave up possession with a loose pass. The host seized on the gift, getting the ball forward for Liam Watt to cross from the left.

Halliday had been sucked inside, leaving the on-rushing Aaron Dunsmore with a chance to connect at the far post. Thankfully for his outfield colleagues, Wes Foderingham was alert and blocked at close range.

Relieved by that reprieve, Rangers knew they had to try and make their quality count. And it was precisely through such a route that a 26th minute breakthrough was secured.

Helander strode out from the centre-back before firing a nice pass forward to Defoe. The real touch of class, however, was in the agility of the 36-year-old’s turn. Spinning to his right, Defoe eliminated toiling markers Dunlop and Chris Higgins. Once inside the area he coolly stroked the ball beyond Hart.

Defoe’s sixth goal of the season was almost followed by a seventh eight minutes later. This time, Halliday kept alive the danger from a half-cleared Jones cross with a header that landed at his feet. The strike was almost instant and seemed to be touched behind by Hart, although no corner was awarded. 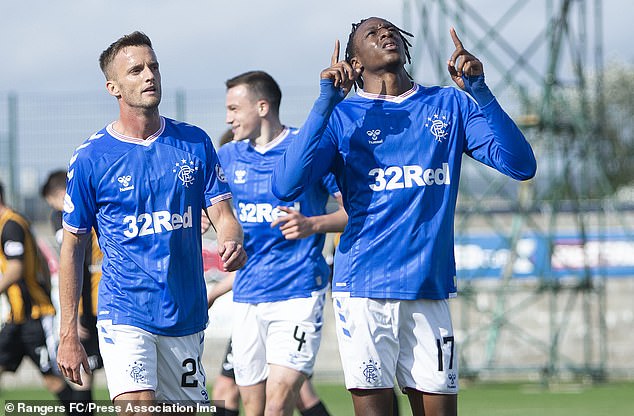 A former Celtic youngster, Hart cannot be accused of lacking personality. Barked instructions to his defence led one vocal critic within the Rangers support to urge silence because he was, bluntly, ‘s***e’. ‘I know,’ Hart shot back, drawing an appreciative chuckle from his former tormentors.

The 23-year-old was called into more meaningful action a minute into the second period. Hart smuggled the danger away when Aribo, who had offered the most creative touches of any Ibrox midfielder, sought to turn in a Jones corner at the near post.

Doubling their advantage would remove any doubt about progression. And Gerrard’s men were quickly back on the front foot in pursuit of that aim.

Greg Docherty picked out Defoe for another exhibition of fast-moving footwork. This time, however, the Bournemouth loanee ran out space prior to finding the side-netting with his shot.

The outcome was only delayed until the 56th minute. Dunlop was booked for hauling back Defoe after again being bamboozled by the striker’s control. But his misery didn’t end there.

Stewart delivered the free-kick deep, with Jones heading across goal. Helander moved in to convert and his header cannoned off Dunlop to cross the line.

That was the signal for Gerrard to dish out two more debuts. Docherty and Stewart were withdrawn just before the hour mark to allow the introductions of King and Barker.

The latter was involved as Aribo wrapped it up with six minutes left. Barker’s corner forced a flap from Hart and the ex-Charlton man eventually poked the ball into the net for his fourth goal in eight appearances. Give me a break: Japanese coach takes heat for resting ace