Drug overdose deaths have spiked in the U.S. due to the continuing coronavirus pandemic, a new advisory finds.

This has especially been driven by increased use of fentanyl, the synthetic opioid 100 times stronger than morphine.

In 25 states, opioid-related deaths have soared by more than 20 percent over the 12-month period.

The pandemic has created the perfect breeding ground for addiction with many turning to opioids to cope with job losses and the deaths of loved ones to the programs being canceled or replaced with telemedicine for those trying to maintain sobriety. 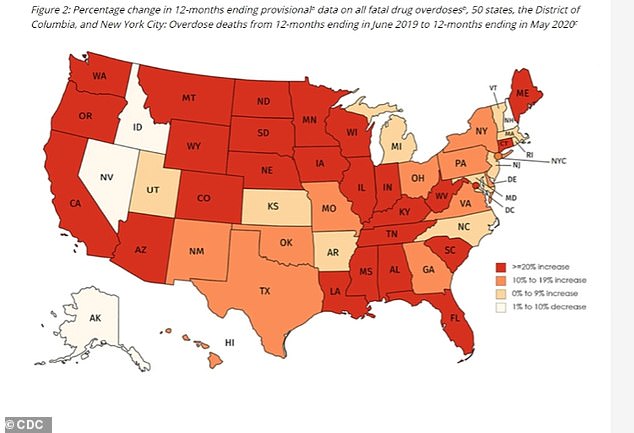 ‘The disruption to daily life due to the COVID-19 pandemic has hit those with substance use disorder hard,’ said CDC Director Dr Robert Redfield in a statement.

‘As we continue the fight to end this pandemic, it’s important to not lose sight of different groups being affected in other ways. We need to take care of people suffering from unintended consequences.’

For the advisory, the CDC looked at death records received and processed by the National Center for Health Statistics.

Specifically drug overdose deaths seem to have accelerated during the early months of the COVID-19 pandemic.

The one-month increase between April and May of 3,388 deaths is the largest monthly increase recorded since provisional 12-month estimates began in January 2015, according to the CDC.

‘The increase in overdose deaths is concerning,’ said Dr Deb Houry, director of CDC’s National Center for Injury Prevention and Control, in a statement.

‘CDC’s Injury Center continues to help and support communities responding to the evolving overdose crisis. Our priority is to do everything we can to equip people on the ground to save lives in their communities.’

In 25 states and the District of Columbia, drug overdose deaths increased more than 20 percent from June 2019 to May 2020. 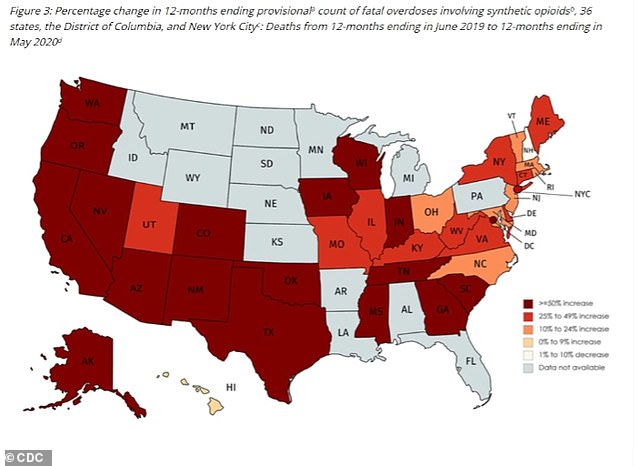 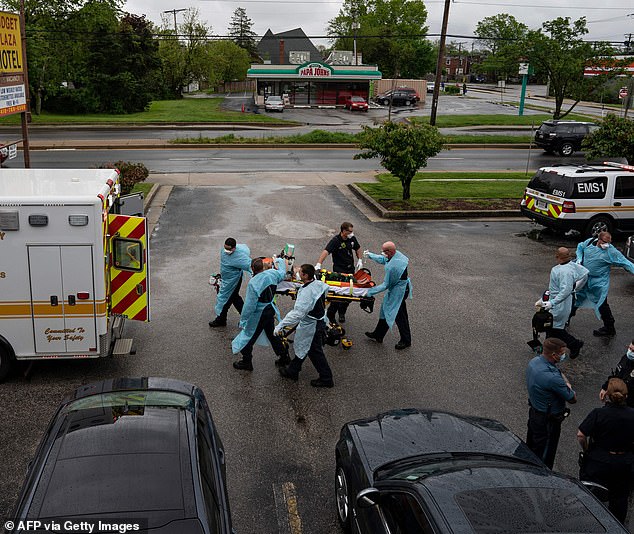 Counties in several states such as California and Nevada say much of it is driven by fentanyl, the synthetic opioid 100 times stronger than morphine. Pictured: Firefighters and paramedics transport a patient after responding to a call for a cardiac arrest as a result of a drug overdose in Brooklyn, Maryland, May 6

HOW AMERICA GOT HOOKED ON OPIOIDS

Prescription opioids and illicit drugs have become incredibly pervasive throughout the US, and things are only getting worse.

In the early 2000s, the FDA and CDC started to notice a steady increase in cases of opioid addiction and overdose. In 2013, they issued guidelines to curb addiction.

However, that same year – now regarded as the year the epidemic took hold – a CDC report revealed an unprecedented surge in rates of opioid addiction.

Overdose deaths are now the leading cause of death among young Americans – killing more in a year than were ever killed annually by HIV, gun violence or car crashes.

In 2019, the CDC revealed that nearly 71,000 Americans died from drug overdoses.

It means that drug overdoses are currently the leading cause of death for Americans under 50 years old.

Among 11 states and New York City, overdose deaths rose between 10 percent and 19 percent.

The report found that synthetic opioids are the the primary driver behind the spike in drug overdose deaths.

Among the states for which data was available, 17 states and the District of Columbia saw a 50 percent increase in fatal overdoses involving synthetic opioids, during this time period.

Just one state, Hawaii, saw a rise of less than 10 percent in synthetic opioid overdose deaths.

The pattern of drugs involved in overdose deaths has changed in recent years, moving away from heroin and natural opioids to synthetic opioids including fentanyl.

According to the Defense Intelligence Agency, 68 percent of fentanyl and precursors used to make the drug originate in China.

These factory-produced drugs, cheap and easy to make, are sold either directly to the US or via trafficking networks set up in Mexico.

According to the Southern Nevada Health District, Clark County – of which Las Vegas is part – saw 63 deaths involving fentanyl among residents up to August of this year.

Over the same period last year, there were 28 fentanyl deaths, which indicates an increase of 125 percent.

In San Diego, there have been 203 fentanyl-related deaths in the first six months of 2020, the U.S. Drug Enforcement Administration reported.

By comparison, there were 152 fentanyl-related overdose deaths in San Diego County in all of 2019.

The CDC report also found that overdose deaths involving cocaine increased by 26.5 percent and those involving psychostimulants, such as methamphetamine, increased by 34.8 percent. Flu jab: How long does it take for immunity against the...