‘If you have goggles or an eye shield, you should use it,’ Dr Fauci told ABC News in an Instagram Live interview on Wednesday.

Coronavirus is primarily contagious through respiratory droplets expelled when people cough or sneeze, but growing evidence suggests that fine aerosols from just regular speaking or breathing may be able to spread the disease too.

Those particles can get into the eyes, too, although it’s not as dominant a route of infection.

The virus is still spreading rampantly in many US states, showing no sign of weakening, even as President Trump pushes for reopenings of businesses and schools, driving experts like Dr Fauci to encourage more – not less – protective gear.

In addition to wearing masks, one of the primary public health recommendations made by officials is that people wash their hands and avoid touching their faces.

That includes the eyes.

If viral particles end up on your hands, they will not infect you through your skin. But touching your nose, mouth or eyes, can introduce the virus to cells it can invade.

Mucosal surfaces are any that are coated with types of cells that make mucus, a thick, slippery fluid that lines and protects certain parts of the body.

Mucus helps slough away pathogens like SARS-CoV-2, the virus that causes COVID-19, and contains immune cells, including B cells and antibodies. 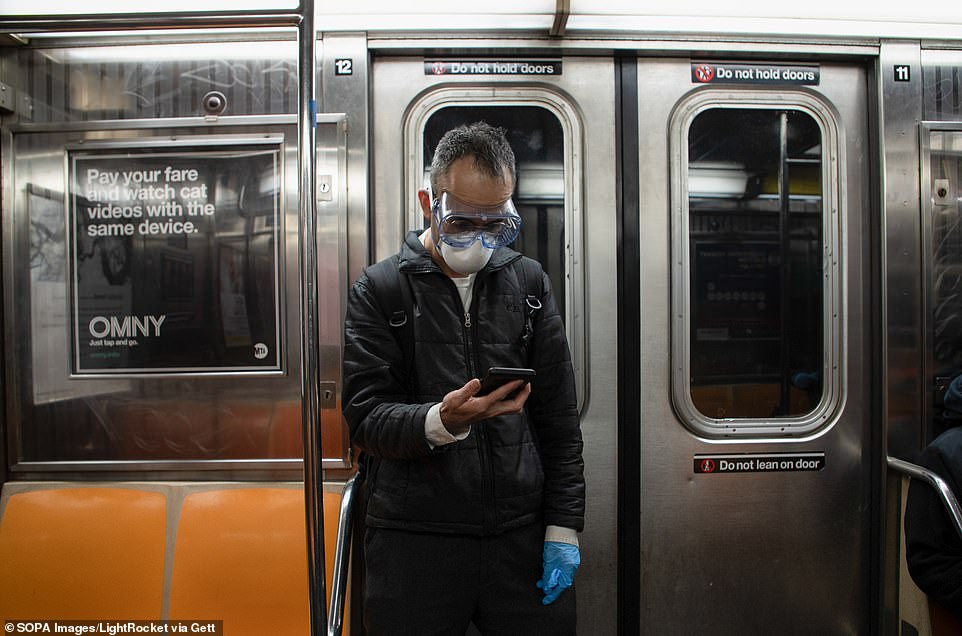 Goggles can keep viral particles out of the eyes, which have ‘mucosal surfaces’ – tissues coated with slippery mucus – that allow the virus to enter the body. Pictured: A man wears goggles while riding the subway in New York City 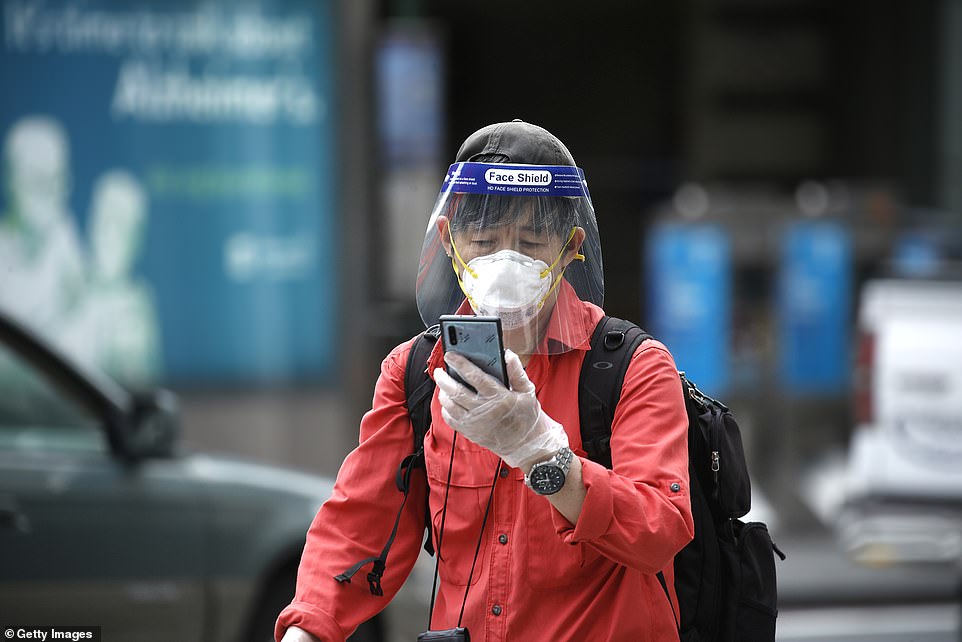 Although they don’t offer as tight a seal, face shields may also help block virus from reaching the eyes, nose and mouth

But we don’t have natural antibodies to the new and unfamiliar SARS-CoV-2, so mucus has less power to neutralize the virus.

And the tissues that mucus covers are necessarily permeable to allow their functions, including mucus secretion as well to facilitate their sensory functions, such as breathing through the nose, and sight via the eyes.

So when mucus fails, viruses are left with an easy entry point to the interior of the body where they are safe to hijack the energy production of our cells and replicate.

Doctors have noted presence of coronavirus in the eyes. In fact, red or pink eyes became a recognizable sign of the infection as the pandemic spread earlier this year.

That tipped doctors and scientists off to the ability of coronavirus to infect eyes via our natural tears.

‘Theoretically, you should protect all the mucosal surfaces, so if you have goggles or an eye shield, you should use it,’ said Dr Fauci.

He noted that it’s not an official or universal recommendation, but that protecting your eyes denies the virus one more opportunity to infect you.

Dr Fauci also discussed the role of aerosols – a fine mist that can linger and travel further through the air – in coronavirus transmission.

‘We don’t know the relative role of aerosol [transmission]…we can assume it plays a role,’ he said.

Particles so tiny will likely be able to get through face coverings short of a perfectly sealed N95 mask. But, so far, they don’t appear to be the primary cause of infections.

‘It does not mean that we should not adhere to universal mask-wearing,’ Dr Fauci said adamantly.

House Speaker Nancy Pelosi announced Wednesday night on the House floor that masks must be worn in the chamber from now on and rulebreakers would be kicked out by the sergeant at arms.

‘Members and staff will be required to wear masks at all times in the Hall of the House except that members may remove their masks temporarily when recognized,’ Pelosi announced, using the official term for the House chamber.

Pelosi is putting in place stricter rules after Rep. Louis Gohmert, a Texas Republican, tested positive for the coronavirus, which prompted at least one high-ranking government official, Attorney General Bill Barr, to get tested as he might have been exposed.

The California Democrat said members won’t be allowed to enter the House chamber sans masks. ‘Masks will be available at the entrypoints for any member who forgets to bring one,’ she also said.

Politico broke the story and reported Wednesday morning that Gohmert had tested positive at the White House during pre-screening for a planned trip to Texas with President Donald Trump.

Gohmert regularly refused to wear a mask and was spotted Tuesday roaming around the Capitol’s hallways and in the Judiciary Committee hearing room before Barr testified without a mask on his face. 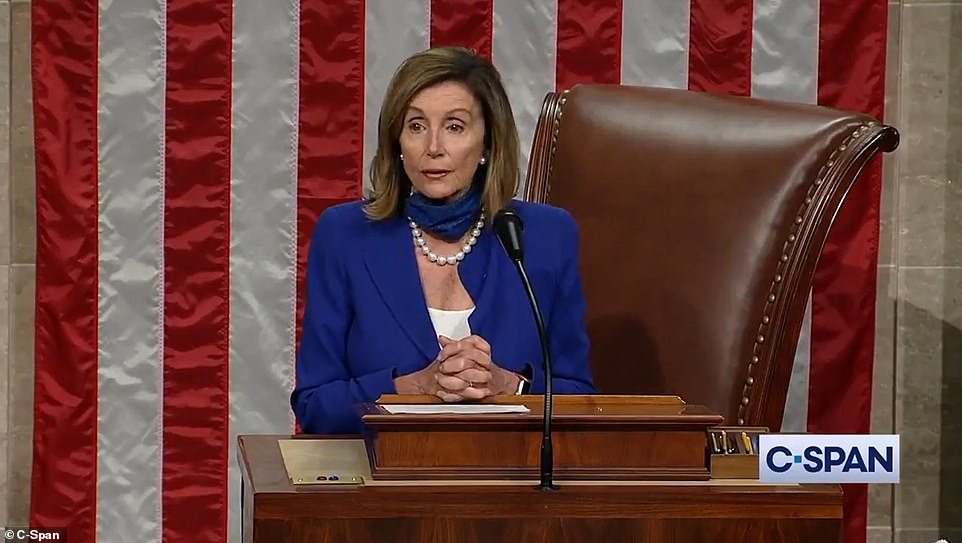 House Speaker Nancy Pelosi announced on the House floor Wednesday night that members would have to wear masks in the House chamber from now on, after Rep. Louie Gohmert tested positive for the coronavirus 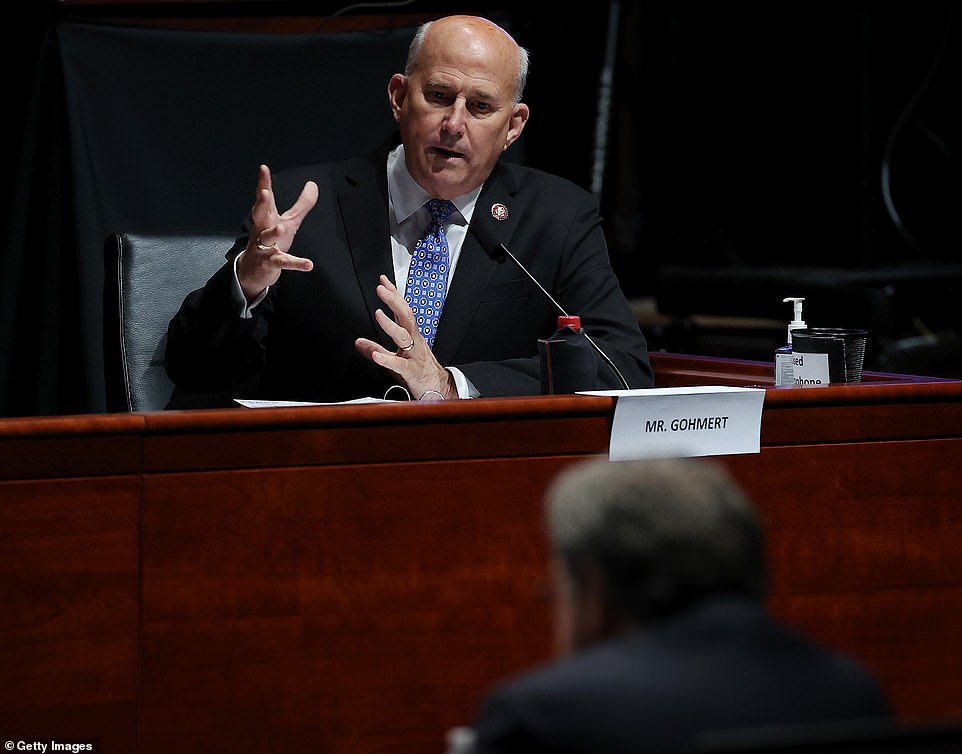 Rep. Louis Gohmert, who is regularly seen on Capitol Hill not wearing a mask, tested positive for the coronavirus, Politico first reported. Gohmert’s case was found because he was being screened at the White House so he could travel to Texas with President Trump Wednesday

On Wednesday afternoon, Johns Hopkins University confirmed that 150,034 Americans have now died from the highly contagious virus, with more than half a dozen states clocking their highest daily number of fatalities in the past 24 hours.

No other country comes close to reporting as many coronavirus deaths as the US. Brazil has seen 88,539 deaths, while the United Kingdom has clocked 46,046 fatalities.

Italy and Spain – which were both hit hard by the coronavirus in April and May – have reported less than 36,000 deaths respectively after their fatality rates sharply declined in the wake of strict stay-at-home orders.

It’s a different case in the United States, where the death rate continues to soar, despite the country stretching into its fifth month battling the pandemic. 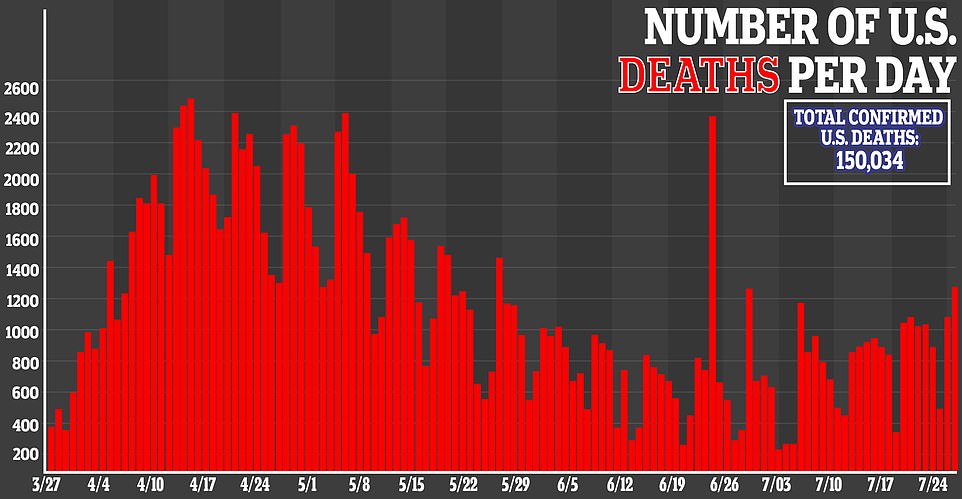 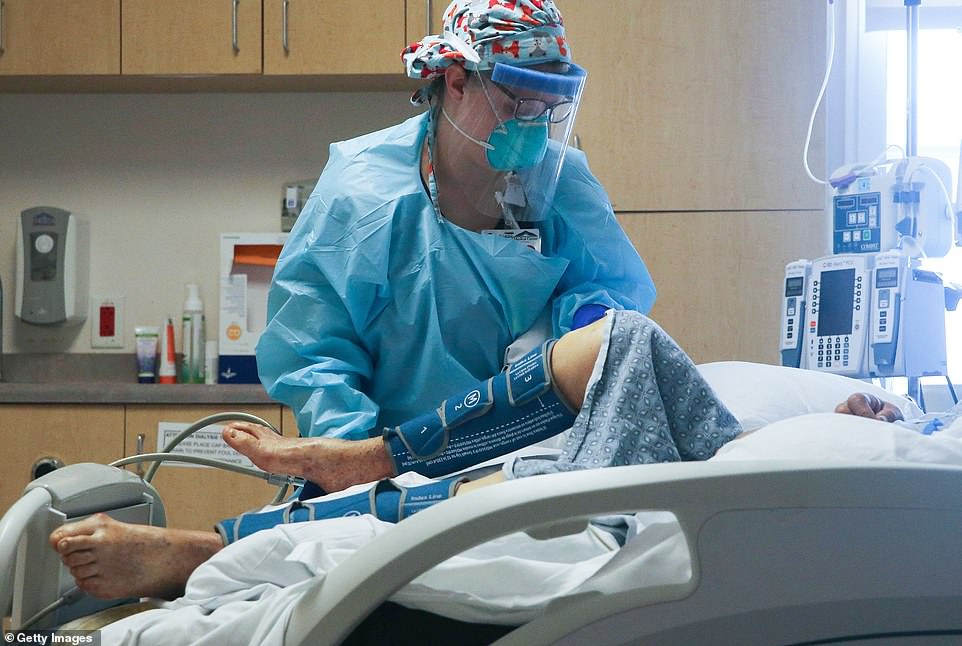 Texas leads the nation with nearly 4,000 deaths so far this month, followed by Florida with 2,690 and California with 2,500.

While deaths have rapidly risen in July in these three states, New York and New Jersey still lead the nation in total lives lost and for deaths per capita.

Even though deaths are rising across the US, they remain well below levels seen in April when an average of 2,000 people a day were dying from the virus.

Health experts have indicated the death toll may not be as bad this time around possibly because a large share of the current cases are younger people, who are less likely to die, and because of advances in treatment and knowledge of the virus.

Deaths are a lagging indicator and can continue to rise weeks after new infections drop. A coronavirus death, when it occurs, typically comes several weeks after a person is first infected.

Only three other states – California, Florida and New York – have more than 400,000 total cases.

A group of 20 Harvard and MIT scientists and volunteers have been quietly mixing and trialing coronavirus vaccines in a private lab and testing it on themselves but are yet to find out whether or not any are effective.

The group’s efforts have nothing to do with the FDA or the government. They have been working in a lab in Boston to try to come up with a safe, effective vaccine like hundreds of others around the world.

They have not yet published results or explained whether any of the volunteers ever tested positive for COVID-19.

The group claims that because people are mixing the ingredients at home after receiving them in drop-off packages, and because no money is changing hands, it is legal.

Calling themselves Rapid Deployment Vaccine Collaborative or Radvac, the group formed in March. It is being led by Preston Estep, a scientist who has a PhD in genetics from Harvard, who said he was alarmed by the government’s timeline of producing a vaccine in 12-18 months. He wondered whether they could privately come up with their own using readily-available ingredients.

Among the group is George Church, a celebrity geneticist who has not left his home for five months and who says the world is underestimating the disease.

Most of those involved did not want to be named but in an interview with Technology Review, Church said he thought the vaccine could work. 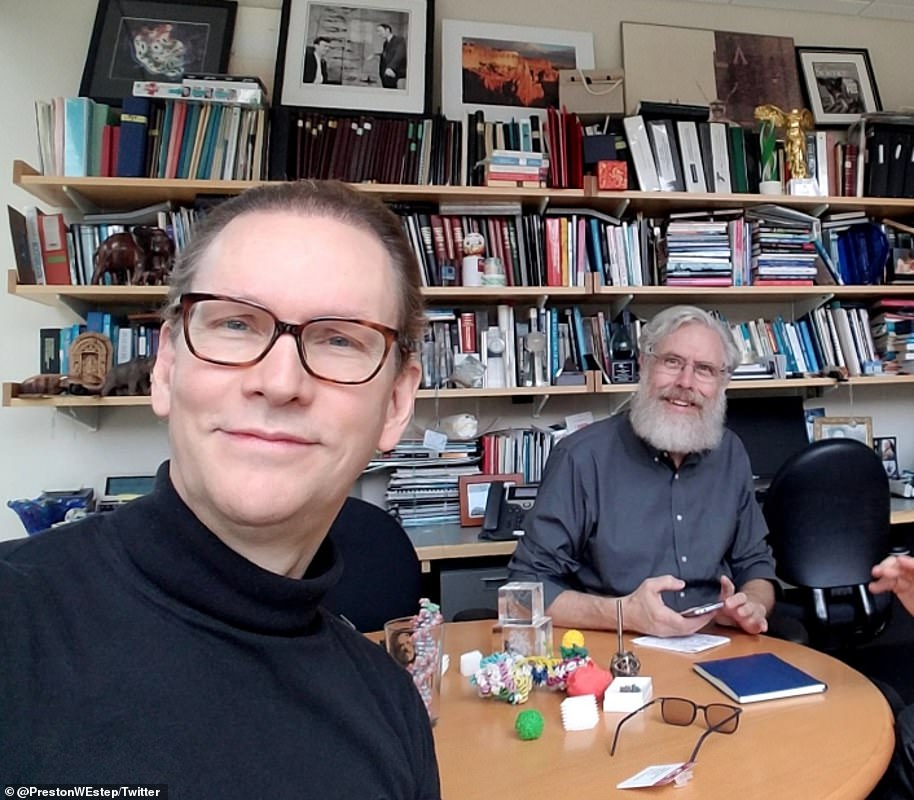 Preston Estep (L) and George Church (R) in 2018. They are among the scientists who have taken the vaccine that Estep who decided to come up with his own vaccine when the government announced its 18-month timeline in March CDC report reveals coronavirus spread to 72% of inmates exposed in...