Stone tools, burnt eggshells and other artifacts discovered in the Kalahari have experts questioning the long-held belief that civilization emerged from coastal regions.

The items date back more than 100,000 years, when the South African desert received enough rain to sustain human inhabitants.

Researchers also found nearly two dozen small pieces of calcite, which are believed to be the oldest known crystals used by humans – suggesting the spiritual ritual was long part of humanity.

They were able to date their findings using luminescence dating, which measures sunlight that’s accumulate in minerals over thousands of years.

Since the objects are contemporary with the oldest artifacts from coastal sites in southern Africa, experts say early humans in the Kalahari were as innovative as their neighbors by the sea.

Shards of calcite crystal, likely used in rituals, were among the artifacts found at Ga-Mohana Hill North Rockshelter in the southern Kalahari

An international team of researchers located the items in a rockshelter on Ga-Mohana Hill, situated above an expansive savannah in the southern Kalahari basin.

Their excavation uncovered hundreds of stone tools, as well as animal bones with signs of butchery, and 42 burned ostrich eggshell fragments thought to have been used as water vessels.

They also uncovered 22 white calcite crystals, all palm-sized or smaller, believed to have ritual purpose.

In southern African, archaeological evidence for early Homo sapiens has mostly been discovered at coastal sites. 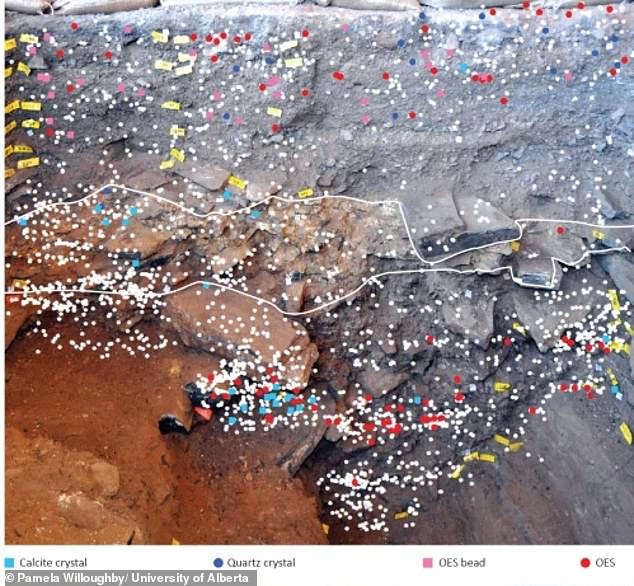 The distribution of artifacts in the rockshelter dating back 105,000 years, as old as any coastal site.  Their discovery has experts questioning the long-held belief that civilization emerged on the coast

That’s led researchers to assume that’s where we as a species originated, said Jayne Wilkins, a paleoarchaeologist at the Australian Research Centre for Human Evolution at Griffith University in Queensland, Australia.

Ga-Mohana Hill is more than 370 miles from the shoreline, but their analysis, published March 31 in the journal Nature, dates the artifacts to roughly 105,000 years ago. 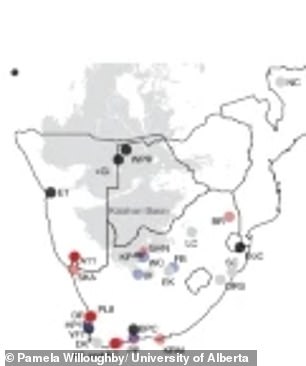 Distribution of ostrich eggshells across southern African archaeological sites dated to 50,000 to 200,000 years ago

That makes them contemporary with some of the oldest items found on the South African coast.

‘Our findings from this rockshelter show that overly simplified models for the origins of our species are no longer acceptable,’ Wilkins said.

‘Evidence suggests many regions across the African continent were involved, the Kalahari being just one.’

Because there are so few archaeological sites dating that far back, it’s not clear if developments in human activity occurred in one region and were brought to another, or emerged independently in different places.

The finds are notable, she explains, because, ‘there have been very few well-preserved, datable archaeological sites in the interior of southern Africa that can tell us about Homo sapiens’ origins.’

At the time the eggshells would have been used, the southern Kalahari received enough rainfall to provide year round water sources for human inhabitants, Science News reports. 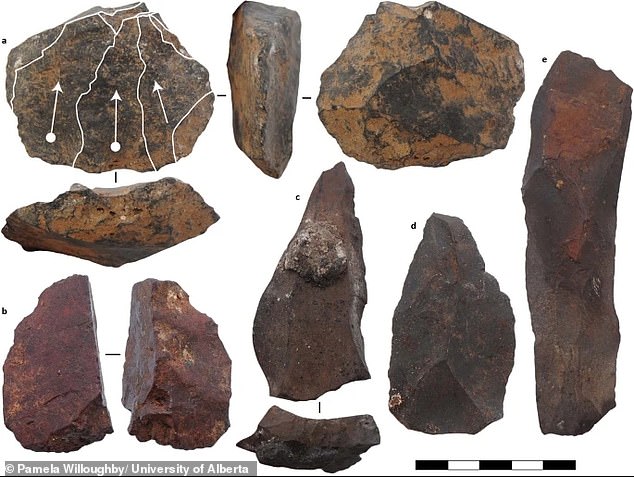 Wilkins’ team ascertained the chronology of stone tools (pictured) and other items at Ga-Mohana Hill North Rockshelter using luminescence dating, which measures natural light that accumulates in minute grains of quartz and feldspar

Wilkins’ team ascertained the chronology of the items at Ga-Mohana Hill North Rockshelter using a technique called luminescence dating, which measures natural light signals that accumulate in minute grains of quartz and feldspar.

‘You can think about each grain as a miniaturized clock, from which we can read out this natural light or luminescence signal, giving us the age of the archaeological sediment layers,’ said coauthor Michael Meyer, a geologist at the University of Innsbruck in Austria.

The process dated the deposit to about 105,000 years ago.

‘This suggests that early humans in the Kalahari were no less innovative than those on the coast,’ Wilkins said. 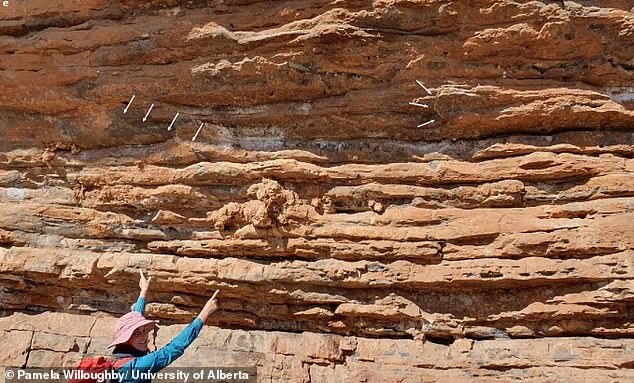 Researchers found the likely source of the calcite crystals about 1.5 miles away from the Ga-Mohana North Rockshelter

Artifacts found in coastal excavations have been dated to between 125,000 and 70,000 years ago, including a 100,000-year-old ‘art studio’ on South Africa’s Southern Cape coast that houses charcoal, grindstones and shells filled with ochre pigment.

While the crystals are unmodified, the team’s analysis indicates they didn’t end up in the sediment naturally, ‘but were deliberately collected objects, likely linked to spiritual beliefs and ritual,’ Wilkins said.

They located the likely source of the calcite about 1.5 miles away from the  Ga-Mohana North Rockshelter.

Prior to their research, the oldest crystals used by humans dated to around 80,000 years ago, and were located at another South African rockshelter. 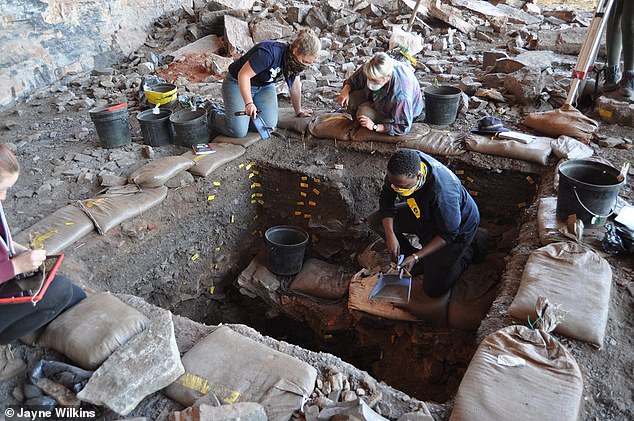 An archaeological excavation at Ga-Mohana Hill North Rockshelter, where early evidence for complex Homo sapiens behaviors was recovered. Local hunter-gatherers continue to use the shelter for ritual activities today

‘Many who visit Ga-Mohana Hill today for ritual practice see it as part of a network of places linked to the Great Water Snake (Nnoga ya metsi), a capricious and shape-shifting being,’ Wilkins wrote in The Conversation.

‘Places such as Ga-Mohana Hill and their associated stories remain some of the most enduring intangible cultural artefacts from the past, linking modern indigenous South Africans to earlier communities.’

The name ‘Kalahari’ comes from ‘kgalagadi,’ a word in the South African language Tswana that means ‘a waterless place.’

Though it’s not technically a true desert — it receives too much precipitation to qualify — there are broad swathes without permanent surface water. Is a Jaffa Cake a biscuit? Physicist uses AI to solve debate Yawning is contagious for lions, who synchronize their behaviors to help group cohesion